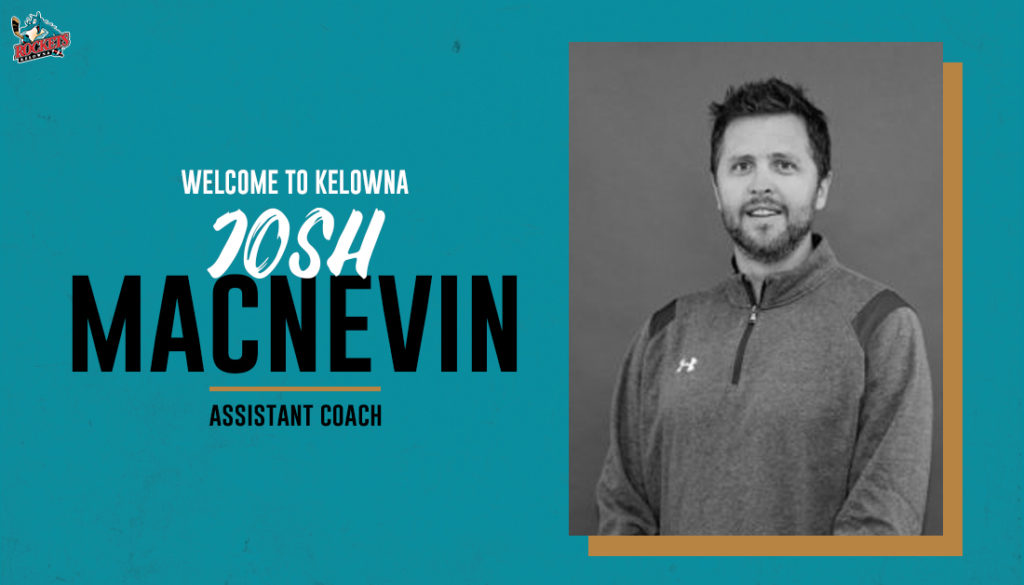 “We are excited to add Josh to our coaching staff,” said Hamilton. “He will bring a new perspective to our existing staff, I believe change and new ideas are very valuable for our team. We look forward to josh and his family getting settled in Kelowna.”

MacNevin, 44, spent the past six seasons with the Lethbridge Hurricanes as an assistant coach.

“I want to thank Bruce, Kris Mallette and the Hamilton family for this opportunity,” said MacNevin. “I’m extremely excited to be a part of the Rockets organization with everything that they’ve accomplished, they’re one of the most storied franchises in the Western Hockey League. I’m over the moon about getting the chance to become a part of that history with Kris.

“I’m excited to bring with me what I’ve learned while in Lethbridge and apply it to the Rockets. I want to thank the Hurricanes, Peter Anholt and Brent Kisio for everything.”

Prior to his coaching stint with the Hurricanes, he served as an assistant coach for the University of Lethbridge Pronghorns Men’s Hockey team during the 2013-14 season.

“We are excited for what Josh and our staff are going to build here in Kelowna,” said Rockets head coach Kris Mallette. “I think that his playing experience overseas allows him to see the game differently, he was an offensive-minded defenceman and I think that will complement the vision that I’m trying to instil into our group, regardless of position.

“I know in speaking with him that he has a bright mind, he’s very eager to learn and has a lot to offer. Everyone that we have spoken to, who has worked with him has had nothing but positive reviews and great things to say about Josh. He’s coming from Lethbridge, where he learned under a great staff there. The hurricanes program has had some real success over the last few years, including a run to the eastern conference finals.”

A defenceman during his playing career, MacNevin was originally drafted by the New Jersey Devils in the fourth round, 101st overall, in the 1996 NHL Entry Draft.

Prior to entering the coaching ranks, MacNevin graduated from Providence College, where he played four seasons with the Friars (1996-00), recording 86 points (20G, 66A) over 137 games.

After turning pro he went on to a playing career that spanned over a decade, with stops in the American Hockey League, Italy, Austria, Germany, Sweden and Finland.

He and his wife Lauren have two children, Millie and Joseph, with a third on the way.