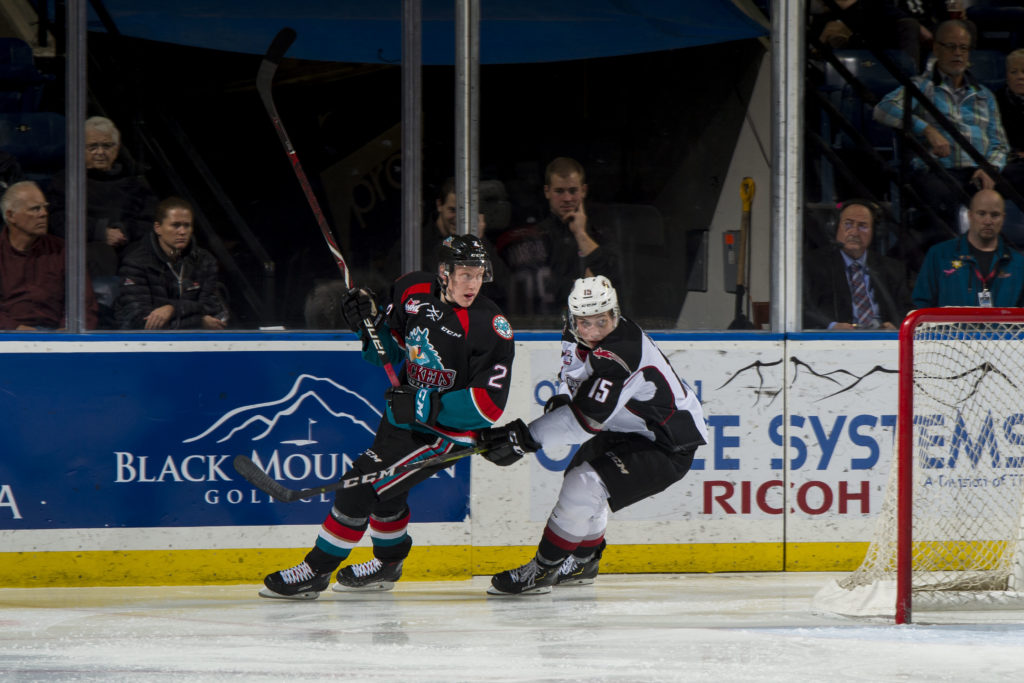 The Kelowna Rockets fell 2-1 to the Vancouver Giants at Prospera Place on Wednesday night, snapping their five-game win streak on home ice.

The Vancouver Giants were awarded the first power play of the game 7:18 into the first when Rockets starting goaltender, Roman Basran went to play the puck but flipped it into the crowd. After nearly a minute into the man advantage, Dylan Plouffe(4) gave the Giants the first lead of the game when he slapped a shot past Basran. The Rockets and Giants were both called for penalties for pushing and shoving post-whistle, Vancouver’s Dawson Holt was assessed a two-minute minor while the Rockets Braydyn Chizen was given an extra two minutes that was served by Ethan Ernst. When it was all said and done the Rockets were down a man. Nolan Foote(16) skated up the left side of the ice firing a short-handed wrister past Giants starter, Trent Miner 10:07 into the opening frame. The two teams headed to the dressing room tied at one.

The two teams exchanged chances throughout much of the first half of the second period. Vancouver’s Milos Roman(14) stole the puck deep in the Rockets zone, he skated out from the corner and gave the Giants a 2-1 lead 9:41 into the period. The Giants held a 2-1 lead through 40 minutes of play.

There were no goals scored during the third period.

The Rockets face the Tri-City Americans Friday night on the road. They’ll return home to face the Saskatoon Blades on Saturday at Prospera Place for the fifth annual Teddy Bear Toss. Tickets are on sale at selectyourtickets.com, at the Prospera Place box office or by phone at 250-762-5050.

For season ticket, mini pack, group seat and suite information fill out this forum, and one of our Ticket representatives will be in contact with you.