Rockets look for B.C. Division Title as they host the Cougars 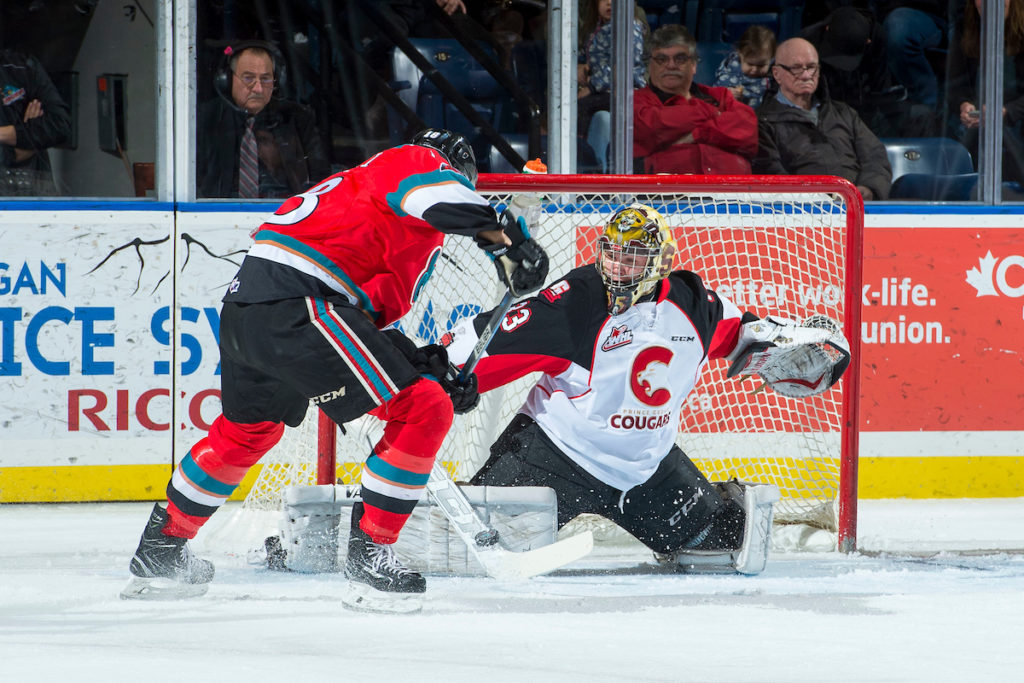 The Kelowna Rockets prepare to host their divisional rival the Prince George Cougars for the last time this season.

“It’s nice to win games, but we really didn’t feel like we were back on track with our play yet. We were fortunate to get four points last weekend,” said Crickard. “Winning those games should give our guys some confidence and positivity, because the results just weren’t there in the previous five games. I don’t necessarily think that our play was better, I just think that leaving the game feeling good about something is a step in the right direction for our team.”

Wednesday’s game will be the eighth and final meeting between the B.C. Division rivals. Kelowna has a record of 5-2-0-0 against the Cougars this season. The Rockets were in Prince George for their first two meetings on October 6th and 7th. Dillon Dube led the way in both games putting up eight points (2G, 6A) in those two games to help the Rockets secure 7-6 and 4-3 overtime wins. The Cougars were at Prospera Place on October 28th when James Porter made 27 saves to lead the Rockets to a 4-2 victory. Kelowna hosted the Cougars again on November 29th, and this time it was Carsen Twarynski’s time to shine. Twarynski notched a hat-trick while Dillon Dube (1G, 2A), Cal Foote (1G, 1A) and Kyle Topping (2A) all had multi-point efforts in a 5-3 Rockets win. The teams didn’t meet again until February 20th, again in Kelowna. Carsen Twarynski had two first period goals and Erik Gardiner’s first goal since returning from missing 39 games to injury stood as the game winner. Most recently these two clubs met in Prince George on back-to-back nights on February 27th and 28th. The Cougars surprised the Rockets winning both games. Joel Lakusta had two points(1G, 1A) to lead them to a 4-1 victory on the 27th, and Jackson Leppard was the set-up man the next night, notching three assists in a 7-6 win. Kole Lind had a natural hat-trick in the first period of that one, and added an assist later in the game for a four point night, but the Cougars prevailed. This will be the last time of the 2017-2018 WHL regular season that the Rockets will take on the Cougars.

With a win tomorrow night, the Rockets can clinch their eighth divisional title in franchise history, and first since the 2014-2015 season. They enter Wednesday night with a 40-22-5-2 record giving them 87 points and placing them first in the B.C. Division. The Victoria Royals can still catch the Rockets as they currently sit at 84 points, but the Rockets have three games remaining, and the Royals only have two. The Vancouver Giants are in third in the division with 79 points, ahead of the fourth place Kamloops Blazers who have 63. The Prince George Cougars round out the B.C. Division sitting in the fifth and final spot with a 23-37-5-4 record giving them 55 points.

Kelowna currently sits in third place in the Western Conference, behind the Everett Silvertips at 95 points, and the Portland Winterhawks at 91. The Spokane Chiefs and Victoria Royals are tied for fourth in the conference with 84 points each.

With the ability to clinch the B.C. Division title with a win tomorrow, Crickard says the team can use that as motivation, but they need to stay focused.

“It was brought up at the end of practice today. We need to focus more on what we need to do in order to clinch that, rather than just clinching it,” said Crickard.

Puck drop on Wednesday night is at 7:05pm.

It’s Hat-Trick Wednesday, get your tickets before 2pm on Wednesday and $20 gets you a hot dog, pop, and your ticket to the game. Tickets for that game are available here: http://bit.ly/2Ftbtpy

Following Wednesday Kelowna is back in action again on Saturday, St. Patrick’s Day, when they close out the regular season against the Vancouver Giants on home ice. It’s a special night as the it’s CIBC Game Night! The first 1000 fans into the building get a Percy Penguin doll to toss during the second intermission Percy Penguin Toss. The lucky fans that get to toss the penguins will throw them at the centre ice face off target and whoever is closest to the target will win $500 courtesy of CIBC! CIBC is also going to match the $500 and donate that amount to the Kelowna S.P.C.A. It’s also Jersey Off the Back Night! Fans have been entering all year to win one of these fancy St. Patrick’s Day themed jerseys sponsored by Bekins Moving & Storage! Winning fans will be given the jerseys following the game on Saturday night. Tickets for Saturday are available here: http://bit.ly/2Ii61Dv

Tickets are available for Rockets home games through selectyourtickets.com, at the Prospera Place box office or by phone at 250-762-5050.