Rockets look to get back in the win column this weekend 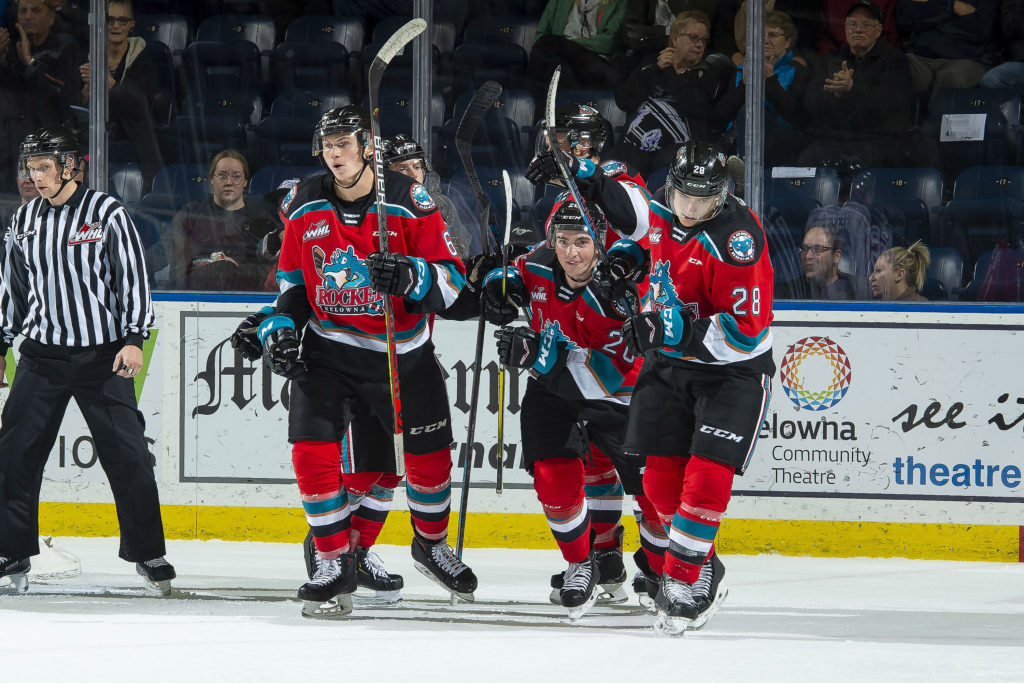 The Kelowna Rockets will be back in action tomorrow night after having the week off. Kelowna will make their first trip south of the border this season to face the Seattle Thunderbirds on Friday before returning home to host the Blazers for the Hershey Candy Scramble Game Saturday night.

Fans are invited to dress up for Saturday’s game in their costume. During the second intermission kids 12 and under will be invited to the ice to collect candy that will be scattered across the ice surface.

Kelowna is coming off of a two-game road trip up to Prince George where they split the contests. The Rockets tamed the Cougars 2-1 with a late power-play goal on Friday, but the Cougars roared back the next night to claim a 4-1 victory. Defenceman Jake Lee says that the team would’ve liked to have picked up both wins, but that the Rockets needed to be better when it came to execution. He says the team has really focused on working hard with their week off.

“It wasn’t the outcome we were looking for,” said Lee. “Obviously we were going in with big things in mind, get the two wins. I think we could’ve executed a little better, that was a problem in our games, and it cost us the second game, unfortunately. In this league, no matter how good your team is or how good you’re playing if you don’t play the right way you’re not going to get the results you want,” said Lee.

“This week in practice, we really focused on execution, making sure that we’re all dialled in and going 100%. Come game time Friday and Saturday execution won’t be a problem like it was last weekend.”

Cole Scwebius, Dillon Hamaliuk and Lee will make their first visit back to the accesso ShoWare Center where they’ll face their former team for the first time since being traded. The trio was acquired from trade T-Birds at the 2019 WHL Bantam Draft on May 2. The Rockets will see a familiar face in the Thunderbirds lineup, forward Conner Bruggen-Cate went the other way in the deal along with three draft picks. Lee says that he’s looking forward to heading back.

“I’m super excited to go back to Seattle for the first time, I’m pumped. I’ve always wondered what it would be like to get traded and play against my former team, and I’m going to get that chance tomorrow night. I know a lot of the guys there obviously, it’s going to be interesting to face them for the first time,” said Lee.

The Thunderbirds haven’t played since last Saturday when they took down the Victoria Royals 5-3 at the accesso ShoWare Center in Kent, WA.

Seattle has a record of 2-3-0-0 and four points, they sit fourth in the U.S. Division with four points. The T-Birds trail the Tri-City Americans for the third spot by two points and are three points behind the Spokane Chiefs. The Portland Winterhawks and Everett Silvertips are tied for first, they’re four points ahead of the Thunderbirds with eight.

Kelowna sits atop the B.C. Division with nine points and a 4-2-1-0 record. They’re a single point ahead of the Vancouver Giants and are three points in front of the third-place Kamloops Blazers, who will visit Prospera Place on Saturday night. The Victoria Royals are in fourth with four points while the Cougars sit in fifth place with three points.

The Blazers are also on the road trip south of the border Friday night, they’ll take on the Silvertips at the Angel of the Winds Arena.

The Rockets have already faced the Blazers once this season, Kamloops defeated Kelowna 3-2 in overtime at the Sandman Centre on September 27. Nolan Foote had two assists in the losing effort.

Puck drop is set for 7:35 pm Friday in Kent. You can listen to the game on AM 1150, watch on WHL Live or follow the Rockets Twitter for live updates.

Come cheer on the Rockets as they take on their biggest rival Saturday at 7:05 pm and get in on the candy scramble. Tickets are on sale at selectyourtickets.com, at the Prospera Place box office or by phone at 250-762-5050