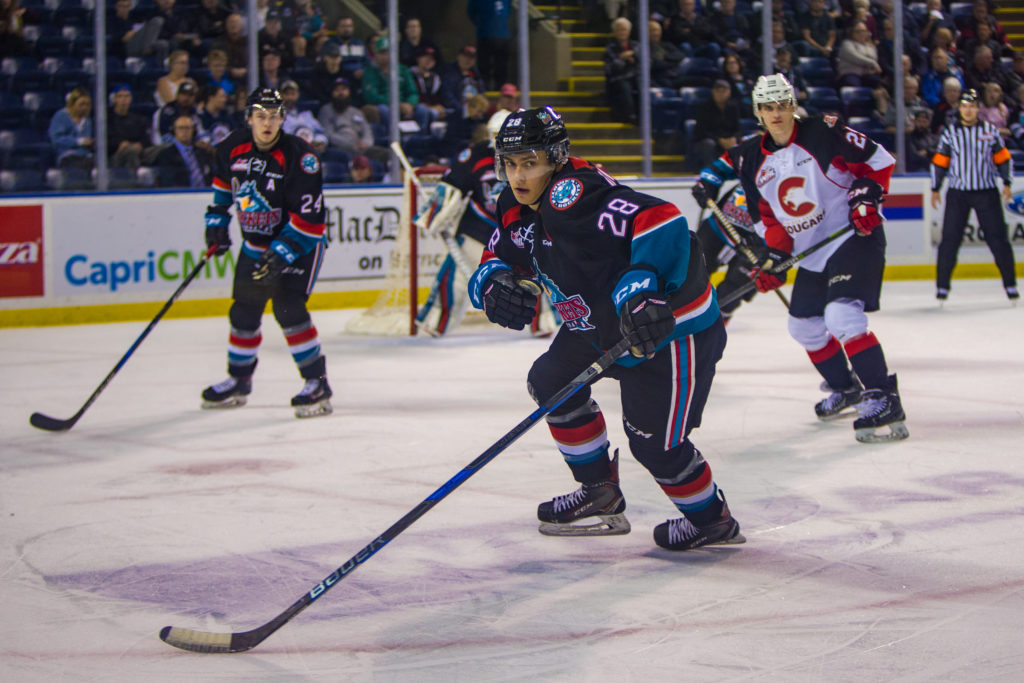 The Kelowna Rockets fell to the Prince George Cougars 4-3 in overtime Wednesday night at the CN Centre in Prince George, British Columbia.

The Rockets found the back of the net on just their third shot of the game, 3:20 into the first period. Liam Kindree teed up a shot that Cougars starting goaltender, Taylor Gauthier kicked away, Erik Gardiner(4) was there to bury the rebound. Kelowna was awarded a power play in the final minutes of the first, but could not capitalise on the chance. The Rockets headed into the first intermission with a 1-0 lead.

Prince George responded early in the second frame on a sharp-angle shot off the stick of Cole Moberg(6) that snuck past Rockets starter, Roman Basran. The Cougars took their first lead of the game midway through the period on a powerplay marker from Matéj Toman(3). Prince George was able to hold the 2-1 lead throughout the period.

The Rockets tied the game 55 seconds into the third period. Nolan Foote stopped a clearing attempt and fed it to Kyle Topping in the slot; he passed it off to Lane Zablocki(2) where he put it between the goaltender’s legs. While on the penalty kill the Rockets chased the puck behind the Cougars net, their goaltender attempted to clear the puck, but it wound up on the stick of Kyle Topping(9) giving Kelowna a 3-2 lead 12:07 into the period. The Cougars were able to tie the game late in the third, with an empty net Vladislav Mikhalchuk(4) was beside the Rockets net to force the game into overtime with 16.3 seconds left.

The two teams went back and forth throughout overtime exchanging thrilling chances. Jackson Leppard dished a pass to Josh Maser(6) to give the Cougars the win with six seconds left.

The Rockets six-game road trip now shifts to Alberta. They’ll play back to back nights, first in Red Deer on Friday, November 16th and then Saturday, December 17th in Edmonton.

The Rockets are back home again on Wednesday, November 21st when they host the Regina Pats at Prospera Place for Hat Trick Wednesday.