THE WESTERN HOCKEY LEAGUE HAS ANNOUNCED ITS RETURN TO PLAY PROTOCOL FOR THE 2020-21 SEASON, CLICK HERE TO LEARN MORE
THE ROCKETS ONLINE STORE AND STORE IN PROSPERA PLACE ARE TEMPORARILY CLOSED
January 21, 2019 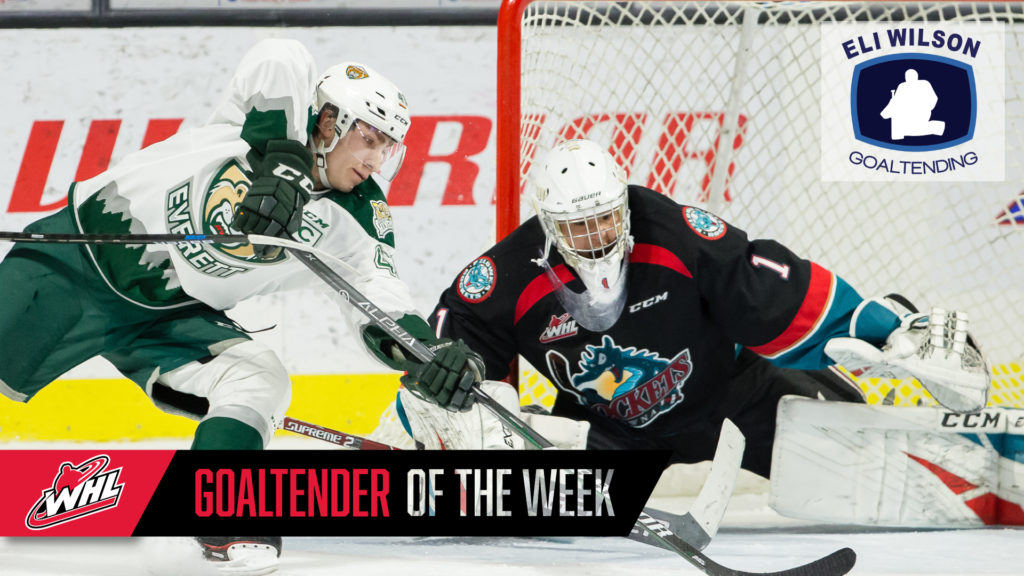 Playing in two games this week, Porter posted a 1-0-0-0 record, 0.00 goals-against-average, stopped 44 of 44 shots for a 1.000 save percentage, and recorded one shutout, allowing the third-place Rockets to remain within striking distance of the Victoria Royals for second place in the B.C. Division.

On Friday against the Everett Silvertips, Porter had a phenomenal game, stopping eight shots in the first period, 19 in the second, and 13 in the third to earn his first shutout of the 2018-19 WHL Regular Season. Able to hold off the Everett power play three times, Porter’s 40 saves contributed to the Rockets’ 2-0 win over the Silvertips. Porter’s performance earned him first star of the game as well as first star of the night in the WHL. The shutout by Porter was the first by a Rockets goaltender in Everett since Kelly Guard accomplished the feat on November 28, 2003.

Porter also saw eight minutes and 40 seconds of action on Wednesday game against the Moose Jaw Warriors, where he stopped all four shots that came his way from the Warriors.

The Rockets will play host to their B.C. Division rivals, the Victoria Royals, Friday, January 25 (7:05 p.m. PT) at Prospera Place.