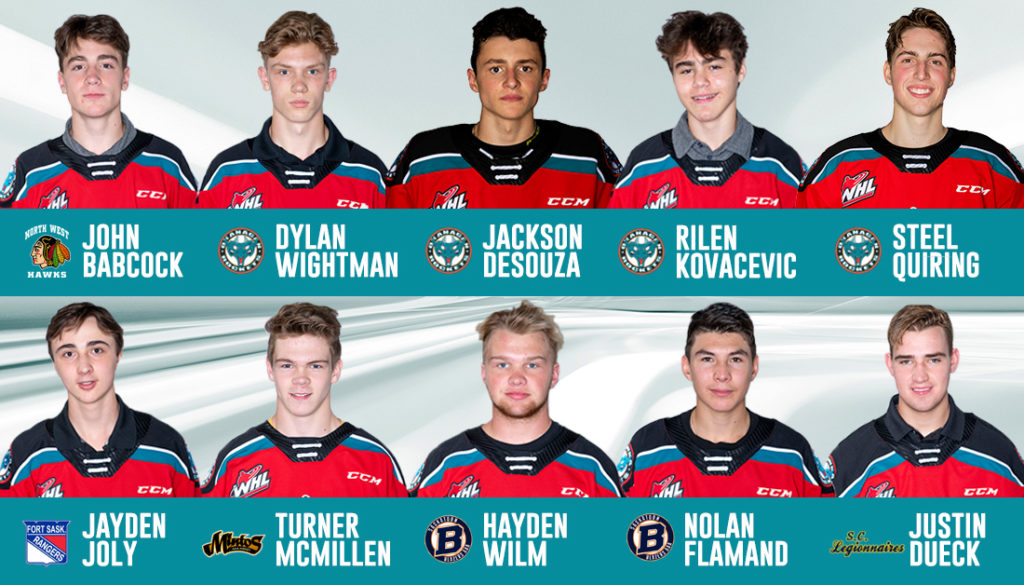 Before they made it to the NHL and prior to suiting up for the Kelowna Rockets on a fulltime basis, alumni such as Mikael Backlund, Colton Sceviour and Luke Schenn competed with their midget teams at The Mac’s Midget AAA World Invitational Tournament presented by Circle K.

This year’s tournament, starting tomorrow in Calgary, Alta., will see ten Rockets prospects compete with their midget teams as they battle against 25 teams over ten days at the prestigious tournament.

Who are the Rockets prospects and what midget team are they suiting up for? Here’s a look:

Dylan Wightman: The WHL Rockets listed Wightman after he went undrafted. The Captain of the Okanagan Rockets is second in BC Major Midget scoring with 33 points (14G, 19A) in 24 games this season. He was named the Major Midget Player of the Month for October.

Steel Quiring: The Rockets fifth-round selection (No. 89) during the 2018 WHL Bantam Draft played with the WHL Rockets before the Christmas break. The 6’1, 181-pound forward has six goals and eight assists in ten games with the Major Midget Rockets. He has appeared in six regular-season games with the WHL Rockets this season. Quiring played for Team BC at the 2019 Canada Winter Games this past February.

Rilen Kovacevic: Kovacevic was selected by the Rockets with the team’s tenth round pick (No. 204) at the 2019 WHL Bantam Draft in May. The 15-year-old helped Team BC secure bronze at the 2019 WHL Cup back in October. He has ten goals and seven assists in 20 games with the Major Midget Rockets.

Justin Dueck: The netminder was taken in the tenth round (No. 204) at the 2018 WHL Bantam Draft. He represented Team Saskatchewan at the 2019 Canada Winter Games back in February. He has a record of 3-8, a 0.88 save percentage and one shutout.

Nolan Flamand: The 15-year-old is eighth in SMAAAL scoring with 33 points (7G, 26A) in 27 games this season. Flamand was the Rockets first pick at the 2019 WHL Bantam Draft in May, selecting him 27th overall in the second round.

Hayden Wilm: The Central Butte, Sask. product was selected during the fifth round (No. 106) of the 2018 WHL Bantam Draft. The forward has five goals and twelve assists in 24 games with the Blazers this season. He suited up for Team Saskatchewan at the 2019 Canada Winter Games back in February.

Turner McMillen: Turner is the son of former Rockets captain Dave McMillen. Kelowna selected the forward during the ninth round (No. 191) at the 2018 WHL Bantam Draft. He has eight goals and sixteen assists in thirty games this season with the Mintos.

Jayden Joly: The Rockets fourth-round pick (No. 71) at the 2019 WHL Draft cracked the Fort Saskatchewan Rangers lineup, but will miss the tournament due to injury.

You can learn more about The Mac’s Midget AAA World Invitational Tournament presented by Circle K by clicking here.