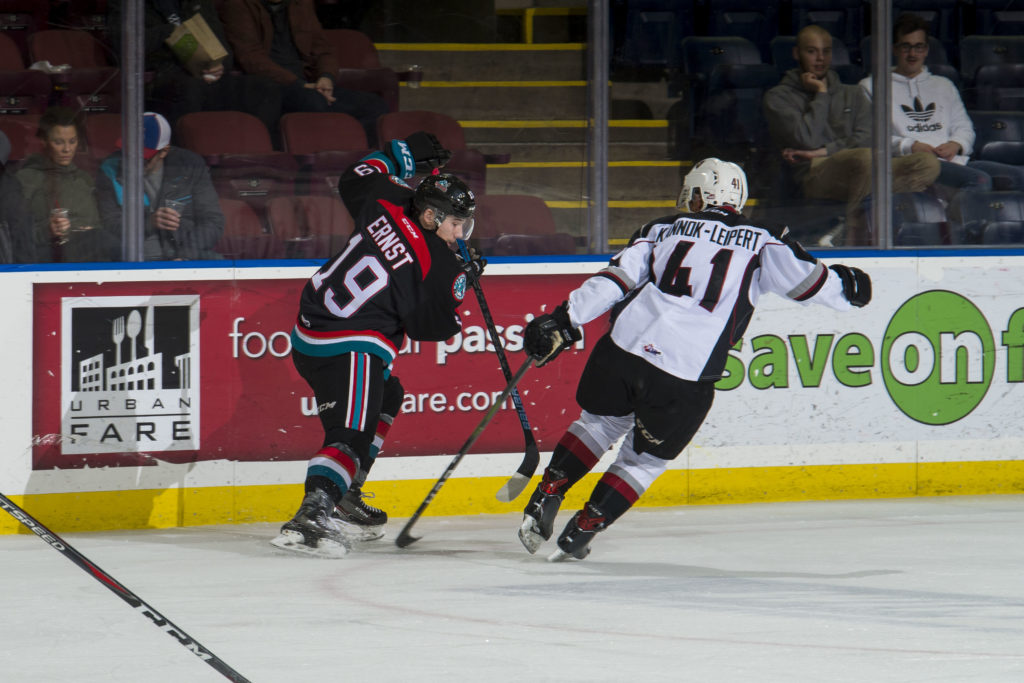 The Kelowna Rockets will return to action this weekend playing three games in as many days. They’ll host the Victoria Royals Friday night, before a home and home series with the Vancouver Giants. That series will kick off at Prospera Place Saturday night before shifting back to Langley early Sunday evening.

The Rockets had a rare Wednesday off this week. They last played on Saturday when they downed the Prince Albert Raiders 4-3 in a shootout. Goaltender, James Porter says that the Rockets are excited to get back on the ice following two big wins.

“We’re coming off two big games that we played very well in,” said Porter. “We’re feeling confident, but we know that we need to work hard every shift. We just need to stick with the same game plan that has been working the last couple of games.”

Tomorrow will be the sixth time the that the Rockets will battle the Royals this season, puck drop is 7:05 pm.

The division rivals last saw each other on December 7th at Prospera Place where Kelowna downed the Royals 2-0. The Rockets defeated the Royals 3-2 on November 23rd at home, Leif Mattson scored his 100th career WHL point. The two previously met on October 5th in Kelowna where Victoria skated away with a 4-3 victory. The Rockets travelled to the British Columbia’s Capital for back to back games on October 19th and 20th where the Rockets exploded with offence winning the first game 8-2 and the second 5-1.

Kelowna and Victoria will play each other two more times this season, back to back games in Victoria on February 18th and 19th.

The Rockets currently sit third in the B.C. Division with 42 points and a 19-22-3-1 record. They’re five points ahead of the Kamloops Blazers and Prince Geroge Cougars who are both tied for fourth in the division with 37 points. Kelowna is five points back of the second place Royals who have a 23-20-2-0 record and 47 points. The division-leading Vancouver Giants hold the top spot with 60 points and a 29-12-2-0 record.

The Giants host the Prince Albert Raiders tonight before heading to Kelowna for the game Saturday night.

They’ll play the Rockets at Prospera Place Saturday night, puck drop is set for 7:05 pm. The two teams will then head back to Langley where they’ll play at 4:00 pm Sunday afternoon.

Vancouver will visit Kelowna again on February 16th, the series will then shift back to Langley on March 1st. The two teams will wrap up the regular season against each other with another home and home series – first on March 15th in Langley and then back at Prospera Place on March 16th.

Seats are still available for both home games, come cheer on the Rockets. Tickets are on sale at selectyourtickets.com, at the Prospera Place box office or by phone at 250-762-5050.