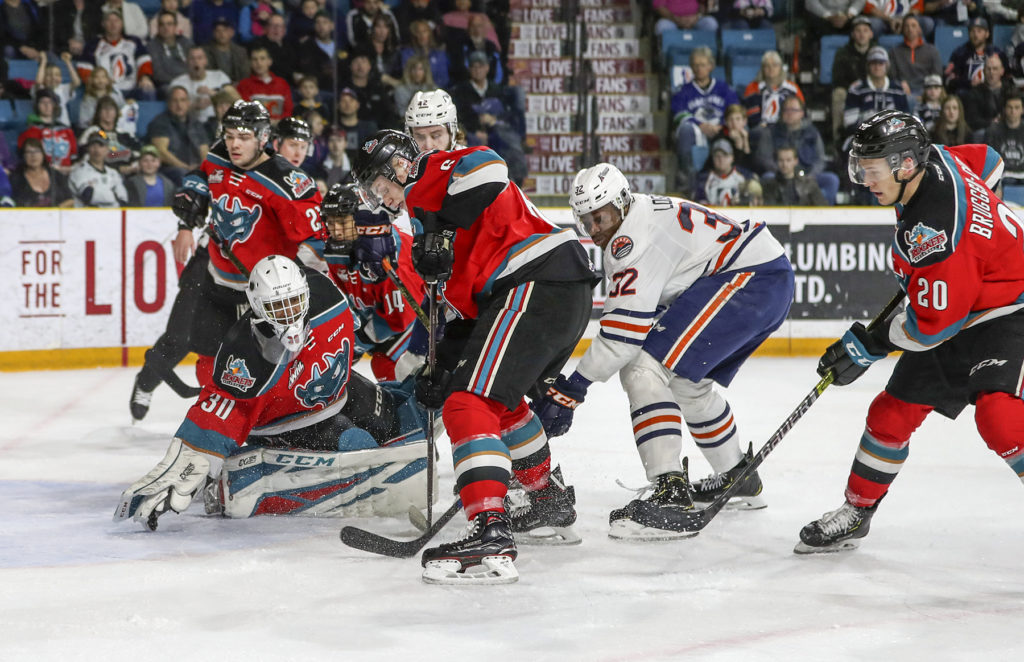 The Kelowna Rockets season came to an end Tuesday night as the Kamloops Blazers defeated them 5-1 in a tiebreaker game at the Sandman Centre in Kamloops B.C.

Kelowna and Kamloops finished the 2018-19 WHL Regular Season tied for third place in the WHL’s B.C. Division and the final playoff spot in the WHL’s Western Conference with identical records of 28-32-6-2 (64 points).

The WHL Tiebreaker Game decided who would advance to the 2019 WHL Playoffs and a best-of-seven, first-round series against the Victoria Royals, who finished the 2018-19 WHL Regular Season second in the B.C. Division.

The two exchanged thrilling chances throughout the opening period. Rockets starter, Roman Basran had to come up with key saves to keep the score at zero as the Blazers outshot the Rockets 17-7 in the frame. Alex Swetlikoff had the Rockets best chance during the opening twenty, he fired right in front of the net but Blazers goaltender, Dylan Garand stopped him point blank. Kelowna and Kamloops entered the first intermission in a scoreless tie.

With Dallon Wilton sitting in the penalty box for interference 4:05 into the second period, Kyrell Sopotyk (1) opened the scoring six seconds into the man advantage. Mark Liwiski (1) responded for the Rockets 3:45 seconds later, tying up the game. The Rockets then headed to their first man advantage when Jeff Faith delivered a late hit on Nolan Foote, but the Rockets were unable to capitalize. After two periods of play, the Rockets and Blazers were tied at one.

Kobe Mohr (1) reestablished the lead for the Blazers 6:10 into the final frame. While on the power play the Rockets gave up a shorthanded goal to Connor Zary (1) with 8:44 to go. Thirty-four seconds later, with the Rockets still on the power play, the Blazers were awarded a penalty shot; Basran turned aside Mohr’s attempt. While still on the initial man advantage, the Rockets gave up another shorthanded tally, Brodi Stuart (1) put the Blazers up 4-1 at 10:12. Following that goal, James Porter replaced Basran in net for Kelowna. With time ticking away and an empty net, Jermaine Loewen (1) put the Blazers up 5-1.

Basran stopped 30 of the 34 shots fired on him, Porter turned aside all five shots he faced after coming off the bench. Kamloops outshot Kelowna 40-28.

Barberis wraps up his WHL career with 179 regular season games played (split between the Vancouver Giants and the Kelowna Rockets). He notched 21 goals and 65 assists for 86 career points. He added two goals and two assists for four points in seven career playoff games.

The Rockets would like to thank the trio for all that they have done for the organization and the community of Kelowna, we wish them all the best as they move on in their careers.