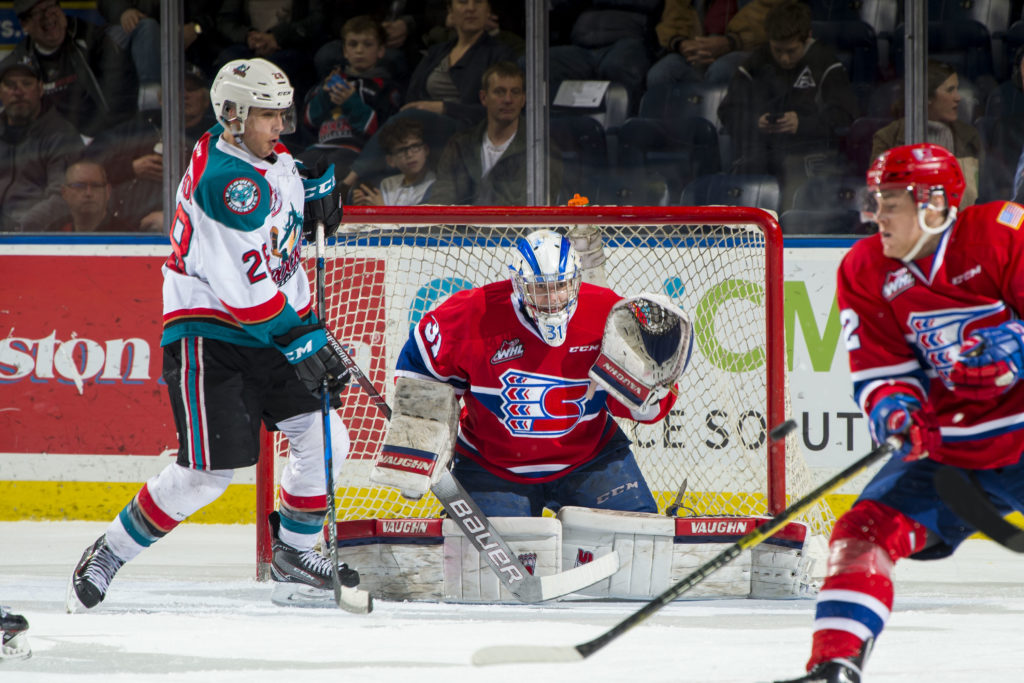 The Kelowna Rockets came back from a three-goal deficit to force overtime against the Spokane Chiefs Wednesday night at Prospera Place. Kelowna picked up a valuable point in the 6-5 overtime loss.

The Spokane Chiefs struck early, just 12 seconds into the game. Kelowna product, Jack Finley (9) put a centring feed past Rockets starter, Roman Basran. Nolan Foote (35) responded for the Rockets 3:42 later when he tucked the tying goal past Spokane netminder, Bailey Brkin. Jaret Anderson-Dolan (19) restored the Chiefs lead at 8:39. The Rockets found themselves on the penalty kill for the first time at 9:16 after Kaedan Korczak flipped the puck into the stands. Kelowna was able to hold off the Chiefs pressing power play. With 2:34 left to play in the opening frame, Luke Toporowski (20) extended the Chiefs lead by two. Following that goal, James Porter replaced Roman Basran in net for the Rockets. Spokane held a 3-1 through twenty minutes of play.

Kelowna started the second period with 16 seconds of power play time carrying over from the period before, but they were unable to capitalize. Ethan McIndoe (15) scored the lone goal of the period 3:11 into it, making it 4-1 for Spokane.

The Rockets cut the Chiefs lead in half 1:15 into the third period, Michael Farren’s (3) shot went off of a skate and into the net. Nolan Reid (16) reestablished the Chiefs three-goal lead at 10:03. Forty-six seconds later, Foote (36) answered for the Rockets with his second goal of the night. With an empty net, Korczak (4) fired a slap shot through traffic and into the Chiefs net to make it a one goal game with 2:29 to play. Riley Woods high sticked Leif Mattson in front of the Chiefs net as the Rockets applied pressure. Porter once again headed to the bench with the Rockets on the power play, Kyle Topping (23) tied the game up with 40 seconds left on the clock in the third period.

The Rockets started overtime with Foote, Topping and Korczak on the ice. Kelowna headed in on a two on one, but lost the puck. It quickly turned into a two on one for the Chiefs, Anderson-Dolan (23) secured the victory for Spokane with his second goal of the night.

The Rockets will now head to Langley to face the Vancouver Giants Friday night. They’ll then return home the next night to host the Giants to finish off the regular season Saturday at Prospera Place. It’s the Rockets annual jersey off the back game, this year the team will be wearing a special superhero-themed jersey. Tickets are on sale at selectyourtickets.com, at the Prospera Place box office or by phone at 250-762-5050.