Rockets victorious in first game of double header against Royals 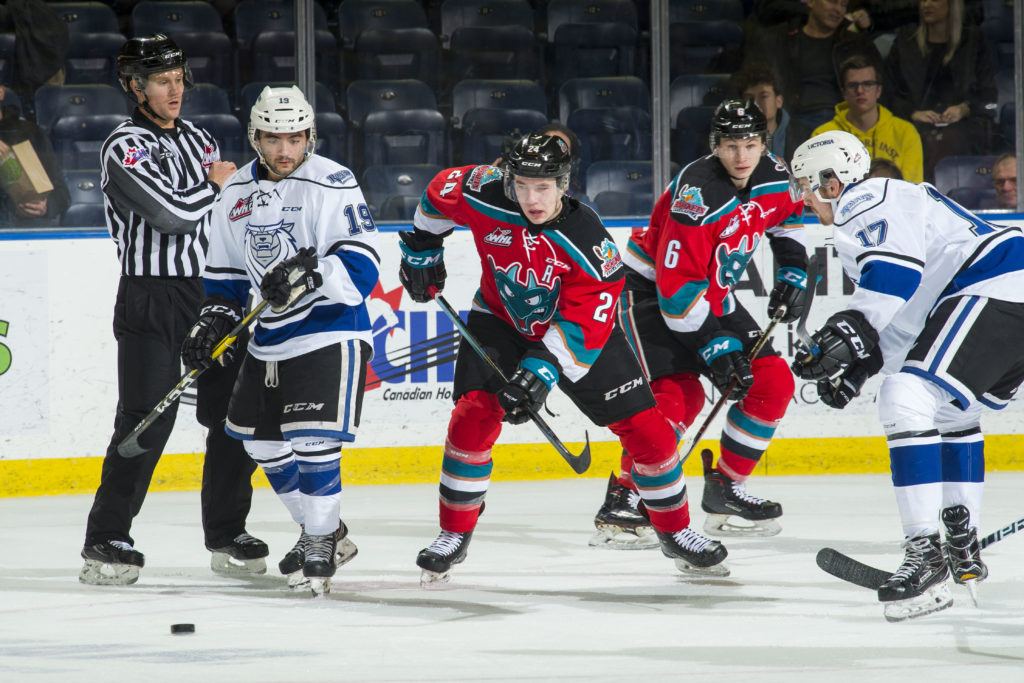 The Kelowna Rockets launched back into the win column Monday afternoon in Victoria, B.C. with a 5-2 victory over the Royals.

It took the Rockets time to get their legs early on in the game, they were outshot 6-1 to start the game early on. Starting goaltender, James Porter came up with a handful of key saves to keep the score deadlocked in a scoreless tie. Rookie defender, Lassi Thomson (16) took off up the middle of the ice, firing from the top of the right circle he beat Royals netminder Brock Gould blocker side at 9:04. The rest of the opening period was clean, no goals were scored, and no penalties were called. The Rockets entered the first intermission with a 1-0 lead.

The first penalty of the game was called 1:03 into the second, Victoria’s Dino Kambeitz was sent to the box after tripped a Rocket. The man advantage was negated 1:24 later when Alex Swetlkoff was called for interference. With Kambeitz back on the ice, the Royals had their first power play of the game, Kody McDonald (16) cashed in, tying up the game at 4:20. At 15:32, Schael Higson (4) gave the Rockets a 2-1 lead in his 300th WHL game,  he launched a slap shot at the net that popped up and into the net. Kelowna was up 2-1 after two periods of play.

The Rockets found themselves in penalty trouble early in the third. Nolan Foote was called for interference at 4:19, then while on the penalty kill, Mattson was called for delay of game at 4:56 after flipping the puck into the crowd. The Rockets were able to kill off the five on three penalty kill. At 7:10, Leif Mattson and Tanner Sidaway were called for offsetting minors, with more room to play Royal, Kaid Oliver (25) tied the game at 8:33. Less than two minutes later Kyle Topping (21) responded for the Rockets restoring the lead at 10:07. Mark Liwiski (8) headed to the net and cashed in the insurance goal of the game at 16:32. Conner Bruggen-Cate (5) extended the Rockets lead to 5-2, 1:21 after Liwiski’s goal.

The Rockets will face the Royals again tomorrow night at 7:05 pm. They’ll then head to Spokane to play the Chiefs Friday night.

The Rockets return to home next Saturday to host the Kamloops Blazers on Saturday, February 23rd. Tickets are on sale at selectyourtickets.com, at the Prospera Place box office or by phone at 250-762-5050.