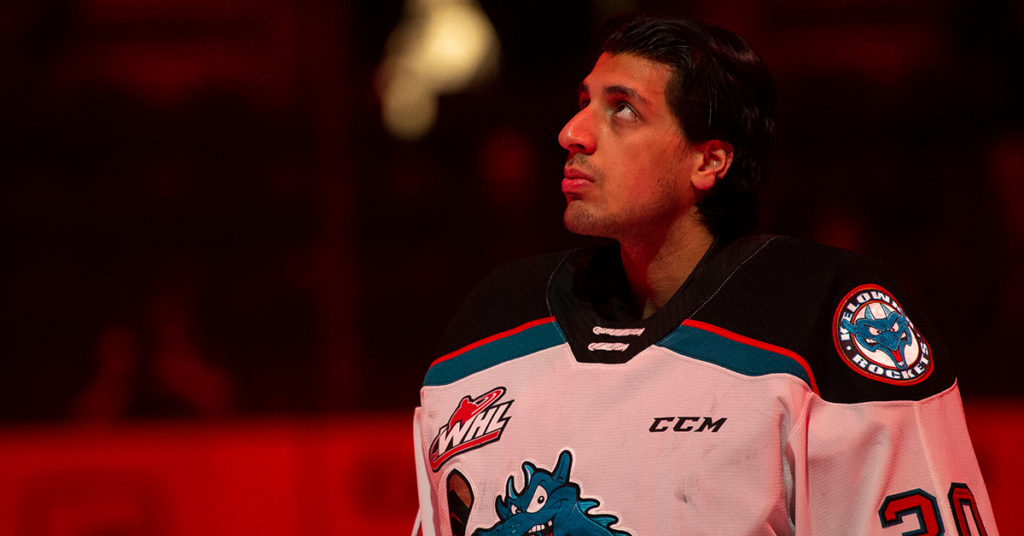 During the summer of 2018, Kelowna Rockets goaltender Roman Basran was preparing for big things. The then 17-year-old was in the middle of rehabbing his torn ACL that had ended his season early, he was headed into his draft year and was ready to see his dream of being drafted by an NHL team come true.

Basran received life-changing news while in Los Angelas at a camp for players represented by CAA.

“I had just finished a workout while I was rehabbing my ACL,” said Basran. “I arrived in the lobby of my hotel to find my dad, my agent and his assistant. They all had this weird look on their faces, I was like, ‘what’s going on?’

“We went up to my room and my dad explained to me that my mom had passed away in her sleep the night before and that he didn’t know what had happened. I was in shock, I didn’t believe it. I tried calling her, obviously, no one was answering.”

Basran said that it didn’t feel real, even after arriving home and visiting the funeral home

“I couldn’t believe it until I got off the flight to go home and some family friends picked us up from the airport. After that, we went to my maternal grandparents’ parents house in Vancouver and everyone was there; uncles, aunts, extended family members and friends. It felt like a dream, it wasn’t real. The only time when people are all together like that in a room is a wedding or when a baby is born but never death, it’s something I had never experienced until then.

“We went to the funeral home and I was in shock. I had been talking to her the other day, this wasn’t possible.”

People packed the funeral for Roop Johal, including many that Basran didn’t expect to see.

“I’m still not sure how many people attended the funeral, it was a lot. My really close friends from growing up playing hockey, former coaches, a few Rockets, some of my friends who played football and basketball were there.

In the following weeks, Basran took time for himself. He continued to attend physiotherapy for his knee but took a step back from his summer training.

“My friends came over and provided me with lots of support. I had sleepovers with my cousins, we just talked about things and played video games. I was still doing an hour of physio for my knee daily, but I could just kind of be a teenager and not a hockey player.”

“When Razor passed away, it was hard to also deal with that. He sent me a video for my school project when I was in grade 11, I still watch it once a month. The video is about how to compete, be a champion and face adversity. He had told me about how he had been cut as a 15 or 16-year-old from 12 different junior teams before one took him on, then he went on to the OHL and signed in the NHL. Next thing you know, he’s playing in the NHL.”

Heading into the 2018-19 season hockey became much more important for Basran.

“I take things from both of them that inspire me every day.”

The 6’4, 190-pound goaltender had one goal last June, to be drafted by an NHL team. He was ranked 18th overall by NHL Central Scouting among North American netminders heading into the 2019 NHL Draft in Vancouver.

“All of that happened. The torn ACL the year before, my mom passed away, Razor passed away, the tiebreaker game and then I wasn’t drafted. On top of it all, not being drafted was an absolute dagger.”

Coming into this season Basran shifted his focus from worrying about what people in the stands were thinking of him and decided to put everything into his game. He’s often one of the last players to get off of the ice at Rockets practices, putting in extra work.

“My numbers this year aren’t what I want them to be, but I know as long as I’m working hard and doing the little things right that’s all that matters. I’m working hard, I still think at the end of the day that’s what’s going to get you to the pro level.

“All these things make you stronger, not getting drafted made me realize that I don’t have to focus on what other people are thinking of me. I do this for my teammates, my mom and Razor, they’re the reason why I want to win hockey games and why I strive to be my best. There are a lot of underdogs out there who are looking to take the spot of the guys who were drafted, I think if I put in the time and work, I will be one of those guys who can catch them.”