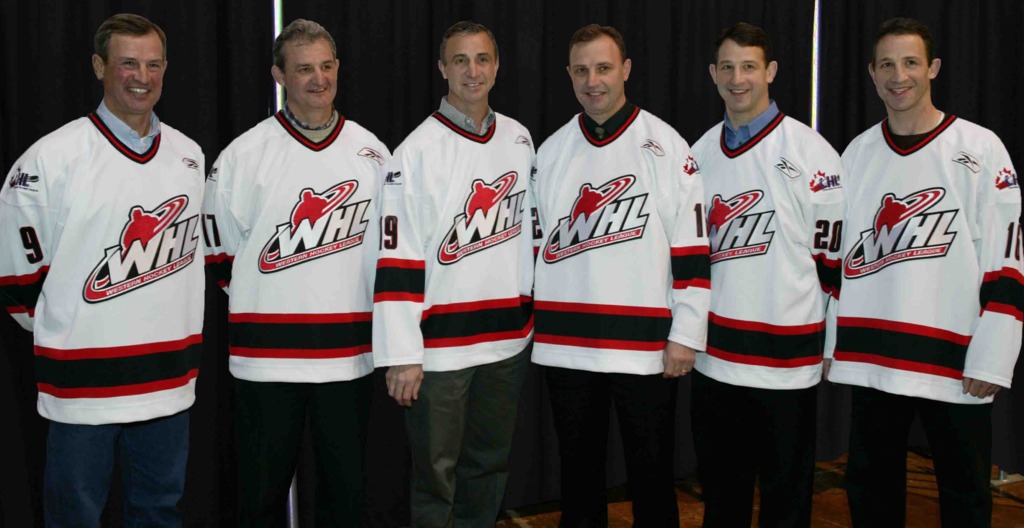 Red Deer, AB – Western Hockey League Commissioner Ron Robison, on behalf of the WHL Board of Governors, announced today that the legendary Sutter brothers will be honoured with the WHL Milestone Award at a WHL Reception Sunday evening as part of the MasterCard Memorial Cup festivities in Red Deer. The WHL Milestone Award pays tribute to extraordinary achievements by players, coaches, trainers, officials and teams over the 50 year history of the WHL.

The Sutters are the only family in WHL history to not only have six brothers play in the WHL but also go on to highly successful careers in the National Hockey League.

“The hockey career accomplishments of the Sutter brothers at both the WHL and NHL levels are nothing short of remarkable and will likely never be matched again by any other family in the WHL,” commented WHL Commissioner Ron Robison. “We are very proud to call Brian, Darryl, Duane, Brent, Rich and Ron graduates of the WHL. Each of the Sutter brothers have made incredible contributions to the game at all levels and their legacy continues to be an inspiration to everyone associated with the WHL.”

Brian, the first to enter the WHL, played two seasons with the Broncos from 1974-76 recording 173 points over 125 games. Selected 20th overall by the St. Louis Blues in the 1976 NHL Draft, Brian played all 12 seasons of his career with the Blues, the final nine of which he served as the team’s captain. He began his coaching career after retiring in 1988 and quickly won the Jack Adams Award in 1991. His number 11 has since been retired by the Blues.

Darryl suited up for the Broncos in the 1977-78 season and recorded 81 points (33g-48a) over 61 games. After being selected by the Chicago Blackhawks in the 11th round, 179th overall, of the 1978 NHL Draft, Darryl played 406 career regular season games for Chicago and registered 279 points (161g-118a). He retired as a player in 1987 and has since gone on to a highly successful coaching career with Chicago, Calgary, San Jose and most recently Los Angeles – where he has won two Stanley Cups in his five years at the helm.

Duane spent time with the Broncos from 1977-80 and recorded 166 points (69g-97a) in 98 games to go along with 307 penalty minutes. Selected 17th overall by the New York Islanders in the 1979 NHL Draft, Duane promptly won four Stanley Cups with the Islanders to start his NHL career. In total, he recorded 342 points (139g-203a) over 731 regular season games along with 1,333 penalty minutes. Duane transitioned to coaching as his brothers before him did and then to scouting where he currently works for the Edmonton Oilers.

With the Broncos for 107 games from 1980-82, Brent Sutter racked up 189 points (101g-88a) and – like Duane – was selected by the New York Islanders in the first round, 17th overall, this time in the 1980 NHL Draft. Brent won a pair of Stanley Cups with Duane in New York and played in 1,111 games between the Islanders and Blackhawks over 18 seasons, recording 829 points (363g-466a) in the process. Brent purchased the Red Deer Rebels following his playing career and guided the club to a Memorial Cup in 2001 as coach and general manager. He guided Team Canada to World Junior gold medals in 2005 and 2006 before beginning his NHL coaching career. Brent has since returned to serve as the head coach and general manager of the Rebels, the host team of the 2016 MasterCard Memorial Cup.

Rich and Ron, the twins and youngest Sutters, have the distinction of being the only two brothers to earn a WHL Championship. The pair suited up for the Lethbridge Broncos for three seasons from 1980-83, winning the League title together in their final season. That season, Ron led the WHL in playoff scoring with 41 points (22g-19a) in 20 games. Ron was selected fourth overall by the Philadelphia Flyers in the 1982 NHL Draft while Rich was taken six spots later by the Pittsburgh Penguins. Each had long careers for seven different teams, with Ron suiting up for 1,093 regular season games and Rich for 874. Rich and Ron played together in the NHL at times for both the Flyers and Blues. The final Sutter brother to retire from playing, Ron began his career in the Calgary Flames’ scouting department in 2001 where he currently serves as Director of Player Development. Rich also went on to spend a great deal of time within NHL scouting departments and also returned to Lethbridge for two seasons in 2008 as the team’s assistant general manager. Rich also currently spends time as an analyst for Sportsnet, the official national broadcast partner of the CHL.