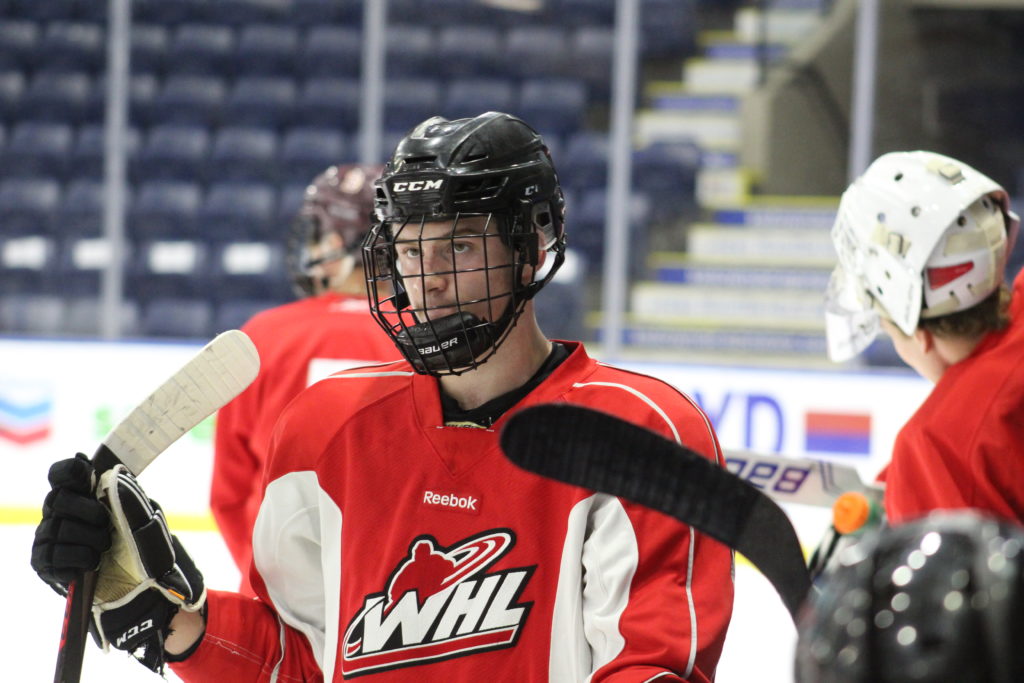 It’s the first camp for McFaul since he was promoted to his current title, he was named the Rockets top scout in spring 2020 after serving as a scout under Lorne Frey for 29 years.

Frey, who transitioned into an advisor position, is in town for camp as well this week.

“It’s the same as always, not much has changed,” said McFaul. “It’s still the same, Lorney and I still do everything together.”

“It’s been great to see our 2005 kids here, they weren’t able to come to a camp after we drafted them due to Covid-19. To see them here and compete the way that they have, we’re very, very happy with those guys.”

McFaul gave kelownarockets.com the low down on the 2020 Draft class, a draft that many consider one of the deepest in recent years.

The group is highlighted by forward Andrew Cristall, defenceman Caden Price and forward Marcus Pacheco. The trio were the Rockets three first picks in the draft and the team was able to sign all three.

“It’s huge to be able to sign your first three picks, those three guys are going to be huge for our team.

“We’ve got a lot of depth in the ’05 group, some of them aren’t very far off. A lot of these guys are going to push the older guys for positions in the next year, it’s a great group to have.”

TM on Andrew Cristall (1R,#8): “Having Cristall come play in the hub series last season was big for him. He’s a very highly skilled kid, grown a little bit. The future is going to be great with him on our roster.”

TM on Caden Price (R2,#30): “We always had Price rated very high. A big defenceman who’s very agile and can skate, he can do everything. He’s got a little bit of grease to him, and he’s got a very good shot and can shoot the puck a ton. He can do it all, he can play on the power play and kill penalties.

TM on Marcus Pacheco (R3,#49) “Getting Pacheco signed was a big credit to head coach Kris Mallette. Kris talked with both of his parents and Marcus, we got him to sign and that was a massive signing for us. We got him in the third round, but we had him ranked a lot higher than that. I think people were scared off thinking he was going to go to school but as always we don’t worry about that, we draft them and then sell them on our program. He’s so fast and so skilled, I’m excited to see him get going.”

TM on Logan Dochuk (R6,#115): “Dochuk is a big guy from Edmonton. He’s a skilled guy and can move the puck, his skating has improved a ton. You can’t have enough good defencemen and we’re very happy to have him.”

TM on Jackson Romeril: (R6,#118): “Romeril is a big physical defenceman who can skate and move the puck well.”

TM on Grady Lenton (R8,#161): “Lenton has grown since we’ve seen him and he has some grit to his game, he’s a highly skilled guy.”

TM on Ethan Neutens (R9,#180): “He’s a big kid from Calgary who can play strong, he’s grown quite a bit from the last time we saw him. He’s been a pleasant surprise with how much he’s grown.”

Ty Mason, the Rockets ninth-round pick in the draft was unable to make it to camp.

TM on Will Munro (R11,#228): “Munro out of Manitoba was our eleventh round pick, on day one of camp Lorne and I looked at each other and smiled, his skating has come so far. He’s a big guy who can score and is great defensively, but we knew that he would have to work on his skating to get to this level, well, his skating has really come along.

TM on Wyatt Homeniuk (R12,#250): “You can never have enough good defencemen, Wyatt brings grit and can move the puck well.”

kelownarockets.com touched base with McFaul on a number of a few other younger Rockets who were around for the hub series last season, as well as Max Graham who was acquired from Everett last month.

TM on Scott Cousins:  “Cousins was a small guy in his draft year, a lot of smaller guys go undrafted just like Shea Weber did. We saw him a couple of times after, but Lorne and I were at a tournament and we saw him and said ‘we need to put him on now’. They all develop and make that jump at different times, they just start making the climb afterwards and you need to be there in the right place and the right time to find them. We’re very happy that we got him, he’s a highly skilled guy who has grit and isn’t afraid to get his nose dirty.”

TM on Max Graham: “I think that’s a great trade Bruce made, we got a guy that we’re going to have for three, maybe four years. He grew a lot and his game has improved so much from his draft year. Fans are really going to like what they see from him.”

TM on Nolan Flamand: “He’s such a smart player, he’s got great offensive skills and his vision is outstanding. He’s good in the faceoff circle, directs traffic very well on the ice. In the hub, I thought he was one of our better guys and he was one of our youngest. He’s hard to knock off the puck and protects it well along the wall, if not better than some of the older guys.”

While the Rockets will be a younger team this season, McFaul says that they’re going to be competitive and the players who played in the hub season last year will be hungrier than ever once the stands are full of fans again.

“I think our defence is going to take a lot of people by surprise, they’re young but they’re big and they can skate and move the puck well. People have been wondering about our scoring, getting Novak and Wong back is big.

“The biggest thing is Kris gave the young guys in the hub got the chance to play and be a part of it, you saw the kids smiling all the time and having fun. When you create that culture, which he’s trying to get back to how we used to be, it’s so easy to get them to be the best that they can be and run through a wall.”

McFaul also had high praise for the Rockets bench boss, he thinks the organization is headed in the right direction with Kris helping develop the next generation of Rockets.

“He relates so well to the kids, I think it’s because his daughter is younger and so he has experience in coaching those younger players and is great at working with them. He was a good defensive defenceman, picked up a lot of good things while he was playing pro, and has worked with a lot of good coaches throughout the years. We just have to be patient with him, he’s got a good plan and we just need to give him time to implement it.”