Thomson’s adjusting to life in Kelowna 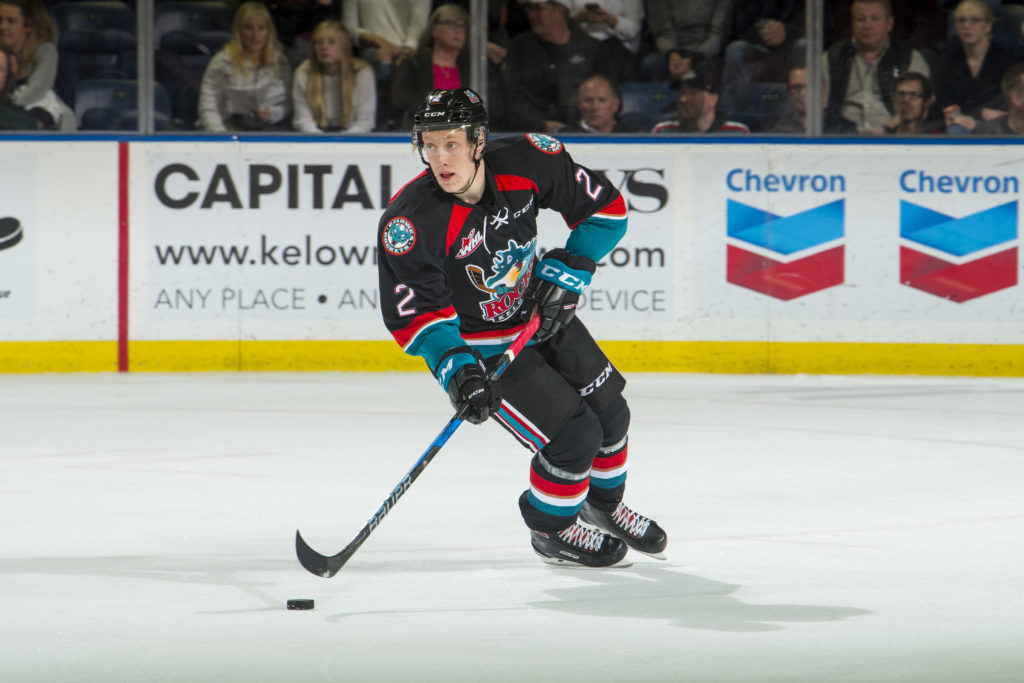 Rockets defender, Lassi Thomson is getting used to life in Kelowna. The Finnish defender was drafted by the Rockets 53rd overall in the first round of the 2018 CHL Import Draft this past June.

He had only been to Canada once before for a hockey tournament when he was younger and was ready to return. Thomson was thrilled when he found out that Kelowna had taken him at the draft.

“I had been talking to a couple of teams, one of them being Kelowna,” said Thomson. “I was excited to see that they had picked me.”

The Tampere, Finland, native played in 49 games last season with Ilves U20, recording 27 points (12G, 15A)  and 44 penalty minutes. He had a busy spring; he played for Finland this past April at the 2018 IIHF U18 World Championships. He recorded two assists in seven games helping the Finns capture gold over the Americans. He also took part in 20 other International-JR games for Finland’s U18 team, notching three goals and adding seven assists for 10 points.

“It may take him a while to adjust,” said General Manager Bruce Hamilton after drafting Thomson. “But we needed to add another defenceman, and we feel he will be a good fit here.”

While it’s clear that he’s a good fit, it appears that it didn’t take much time for the Finn to adjust to the North American game. He’s currently tied for sixth in rookie scoring and leads all rookie defenceman in points in the Western Hockey League. Through 23 games he has 16 points (7G, 9A) and 18 penalty minutes. Thomson scored a highlight reel goal against the Prince George Cougars last month where he went from end to end weaving his way around opposing players to score a gorgeous goal that brought the fans at Prospera Place to their feet.

“The ice is bigger in Finnland. I found the first couple games tougher on the smaller ice, but now it’s easier to play. I’ve noticed that the North American game is more physical, but I like it, it’s a lot of fun,” said Thomson.

Lassi credits his teammates as well as his billet family with helping him learn English and adapt to the Canadian lifestyle.

“I have a couple of teammates who drive me every day to the rink; I can talk to them whenever about anything. I’m billeting by myself, it’s like having a second mom and dad, they’re so nice.”

Thomson was listed as a C-rated prospect on the NHL Central Scouting’s ‘Players to watch” list that was released on October 2nd. He jumped to a B rating on the updated list that was released last week, meaning that he could be drafted in the second or third round during the NHL Draft in June of 2019. When asked what team he’d like to be selected by if he had the choice the defender picked a team that’s loaded with offensively minded European blueliners.

“I like the Buffalo Sabres, they have Rasmus Ristolainen and Rasmus Dahlin,” said Thomson.

For now, Thomson is focused on patrolling the blue line and hopefully getting a shot to play with Finland at the World Junior Championships next month in Vancouver and Victoria.

Your next chance to see Thomson and the Rockets play is this Wednesday when they host the Regina Pats for Hat Trick Wednesday at Prospera Place.