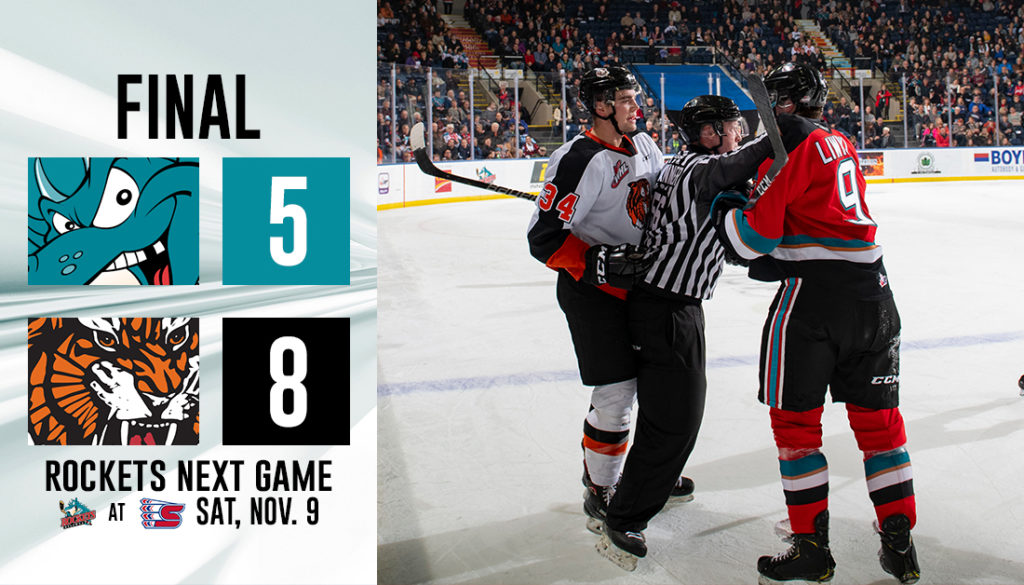 The high-scoring game saw 13 goals scored by 12 different players, Rockets assistant captain Leif Mattson was the lone player to find the back of the net multiple times.

Six seconds into the power play, Kobe Mohr (2)  redirected his first goal in a Rockets uniform to give the Rockets a 1-0 lead 6:10 into the opening period. Just under eight minutes later, Brett Kemp (5) answered for the Tigers with a power-play goal of his own. Daniel Baker (6) put Medicine Hat in front for the first time with 33 seconds to play in the opening frame.

Alex Swetlikoff (5) tied the game once again in the first minute of the second period. Jonathan Brinkman (2) and Bryan Lockner (5) pushed the Tigers past the Rockets with goals 43 seconds apart. Nolan Foote was assessed a game misconduct and a five minute major for checking to the head, on the ensuring power play Tyler Preziuso (6) gave the Tigers a two-goal cushion. Michael Farren (2) got one back for the Rockets on the penalty kill. Just before the end of the second period, Leif Mattson (3) made it a one-goal game while standing in front of the Tigers net.

.@27Farren's mo is killer, so was this short-handed effort. pic.twitter.com/Nup68BK7YF

Mattson (4) tied the game with his second of the night just after the midway point of the third period. Less than a minute later Trevor Longo (4) put the Tigers ahead again.  Corson Hopwo (2) added an insurance marker and Eric Van Impe (2) cashed in on the empty net.

Kelowna will hit the ice again tomorrow night on the road to face the Spokane Chiefs.