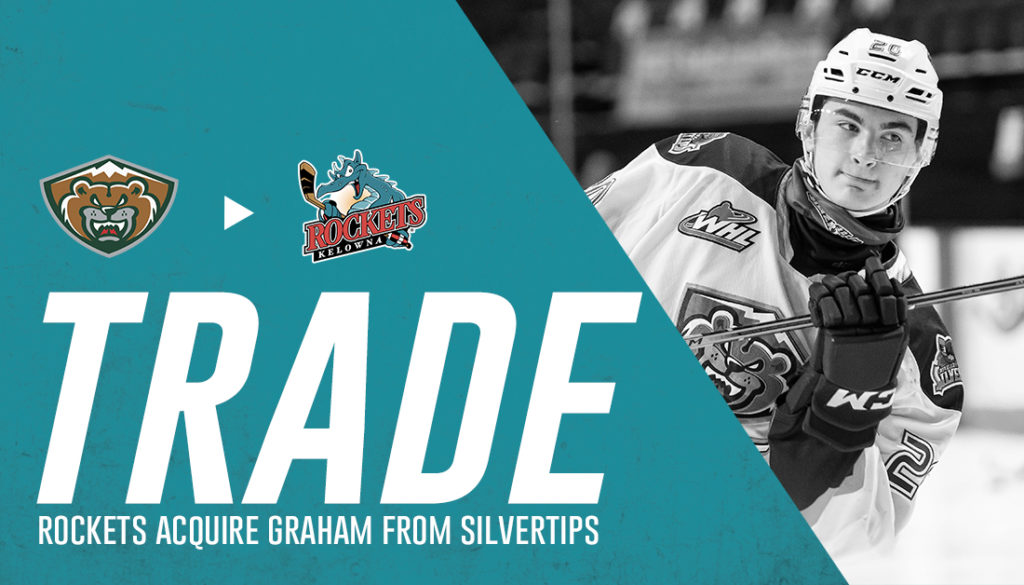 Kelowna Rockets president and general manager Bruce Hamilton announced today that the Rockets have acquired 2004 born Max Graham from the Everett Silvertips in exchange for 20-year-old centre Alex Swetlikoff and the Rockets sixth-round pick at the 2023 WHL Draft.

“Our organization knows a lot about Max,” said Hamilton. “Lorne Frey and Terry McFaul were both high on him, Lorne had talked about listing him a couple of years ago and we missed our chance. He’s a guy that Everett listed out of Kelowna Minor Hockey and has turned into a real player, he speaks volumes for the players that don’t get drafted. There are still opportunities out there for them. We’re really excited to have him join our team, we know he’ll have an impact certainly in the future, if not now. We paid dearly for him, giving up a real high-end player in Alex, but we think that he gives us great depth in the ’04 age bracket.

“In Alex, we lose a very skilled player and leader on our team. I have known Alex since his childhood. He is a class act and I personally along with the entire Rockets organization wish him all the very best.”

Graham appeared in 18 games as a 16-year-old rookie for the Silvertips this past season, posting two assists, six penalty minutes and a +1 plus-minus rating.

The Kelowna, BC product was signed by Everett after going undrafted in the 2019 WHL Draft.

The Rockets acquired Swetlikoff’s WHL rights from the Lethbridge Hurricanes in December 2018. He appeared in 111 games for Kelowna over the last three seasons, collecting 54 points (25G, 29A), 70 penalty minutes and a -19 plus-minus rating.

The Rockets are set to open their regular season schedule on October 2, 2021, against the Everett Silvertips. Season tickets are now available to the general public for the upcoming 2021-22 Rockets season. Click here for details and pricing.