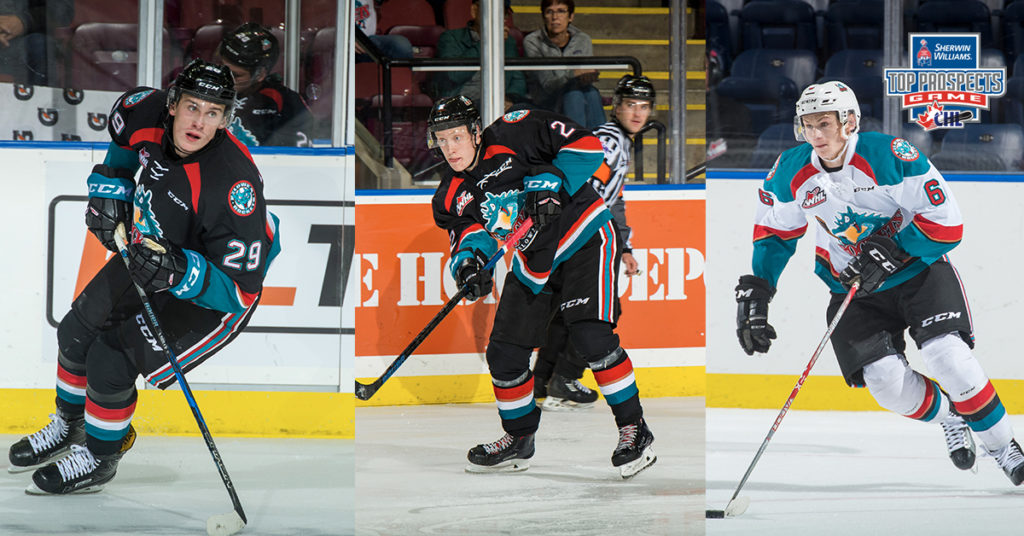 The Canadian Hockey League in association with National Hockey League Central Scouting announced today the 40 players that will compete in the 2019 Sherwin-Williams CHL/NHL Top Prospects Game. Of the 40 players, a trio of Rockets will be in attendance; Nolan Foote, Lassi Thomson and Kaedan Korczak.

Foote is rated as an A prospect by the NHL’s Central Scouting on their ‘Players to Watch’ list, meaning that he’s projected to be a first-round selection at the upcoming NHL Draft in Vancouver. The 6’3 winger is third in team scoring with 31 points (18G, 13A) and 26 penalty minutes in 31 games this season. It has been a busy season for Foote, he represented Team WHL at the 2018 CIBC Canada Russia series last month in Kamloops and Vancouver where he had four penalty minutes in the two games.

Thomson has a B rating, indicating that he’s projected to be drafted in either the second or third round. He’s playing his first season in North America; the puck-moving defenseman was selected 53rd overall by the Rockets at the first round of the 2018 CHL Import Draft. He’s sixth in rookie scoring in the Western Hockey League with 22 points (7G, 15A) and 24 penalty minutes in 33 games played. Thomson has been added to Finland’s IIHF World Junior preliminary roster, he’ll depart for their pre-tournament camp  Saturday.

Rounding out the trio is B rated defenceman, Korczak. The steady defender is sixth in team scoring with 17 points (2G, 15A) and 22 penalty minutes in 33 games played. Korczak was originally select 11th overall by Kelowna at the 2016 WHL Bantam Draft. It’s also been a busy year for the Yorkton, SK product, he helped Canada win gold at the Hlinka Gretzky Cup in Edmonton back in August.

The 24th annual showcase of the CHL’s top prospects eligible for the NHL Draft will be played on Wednesday, January 23, 2019, at the ENMAX Centrium, home of the Western Hockey League’s Red Deer Rebels.  The 40 competing players were chosen by NHL clubs and include talent from across the WHL, the Ontario Hockey League, and Quebec Major Junior Hockey League.

Your next chance to watch Foote, Thomson, Korczak and the Rockets play at Prospera is Saturday, December 29th against the Kamloops Blazers. Tickets are on sale at selectyourtickets.com, at the Prospera Place box office or by phone at 250-762-5050.

Season tickets are now half price! Season ticket holders will have first right of refusal on 2020 Memorial Cup presented by KIA ticket packages.