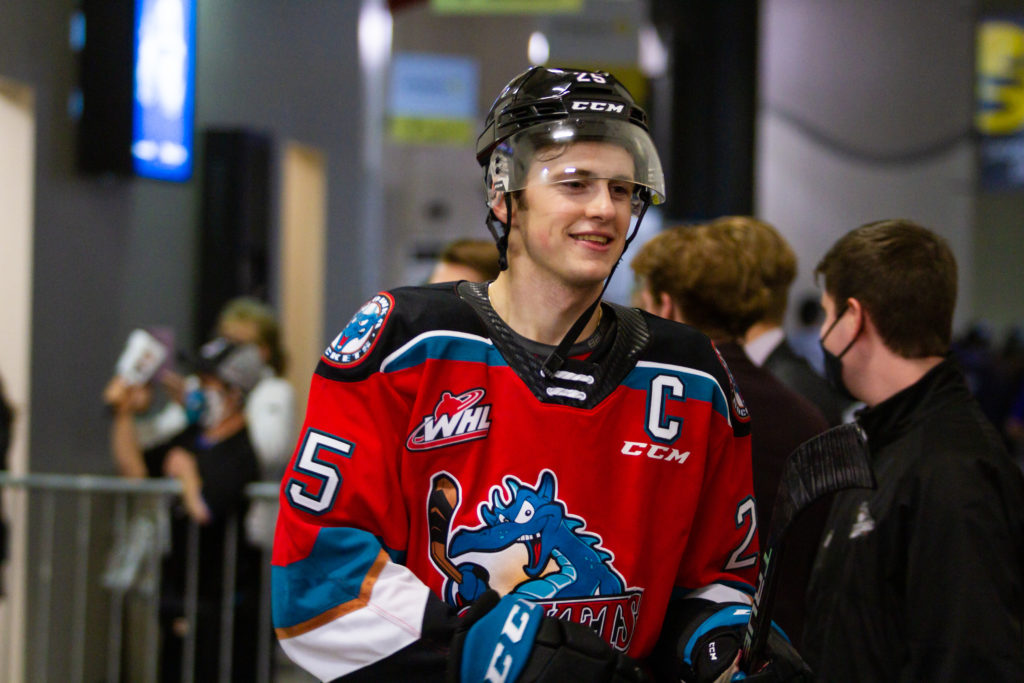 On October 6, 2021 defenceman Tyson Feist was named the 26th captain in Rockets history.

For a team that’s known for developing defencemen, Feist joined a small list of players who were defenders to wear the C. Only 10 of the 26 captains have been defencemen, that includes: Feist, Cal Foote, Madison Bowey, Tyson Barrie, Josh Gorges, Gavin McLeod, Curtis Rich, Burt Henderson, Dallas Thompson and Scott Thomas.

“It’s a huge honour, especially in this organization where there have been a lot of great captains,” said Feist. “To be one of those guys to wear the C and lead the team is a huge honour for me.”

It’s been a bit of a trek for Feist to this point. The Dawson Creek, BC product went undrafted in the WHL Prospects Draft and has played his way up from Junior B to captaining a WHL team.

Following his WHL draft year in 2016, the then 5’10” Feist earned an invite to the Spokane Chiefs camp. Motivated, he returned to the Pursuit of Excellence where he posted 17 points (3G, 14A) and 44 penalty minutes over 30 games with the POE Elite 15s of the CSSHL U16.

“I went into that year to work hard and prove everyone wrong. I had a good year and Spokane reached out to me.”

The next season, he got into eight contests with the Chiefs, but spent the majority of 2017-18 playing Junior B. He appeared in 27 games with the Spokane Braves of the KIJHL, posting 17 points (2G, 15A) and 48 penalty minutes.

During the 2018-19 campaign, Feist cracked the WHL full time. Twenty-five games into the season, he was dealt to the Regina Pats. When it was all said and done, Feist had appeared in 46 games as a 17-year-old rookie, posting seven assists and 46 penalty minutes.

The 2019 WHL Prospects Draft was an exciting time for the Feist family as his younger brother, Layton, was selected 17th overall in the first round by the Pats.

“Going into my second year in Regina, my brother was drafted by Regina. We played one preseason together, it was a cool experience because we had never gotten to play together before.”

Unfortunately, the pair wouldn’t get the chance to play a regular-season game. Following the end of the Rockets game on January 8, 2020, it was announced at 10:45 p.m. that the Rockets had acquired the right shot d-man to bolster their roster for the 2020 Memorial Cup run.

“I think that the acquisition of Tyson will help us, he plays with a bite and brings a physical presence,” said Rocket president and general manager Bruce Hamilton at the time of the trade.

“I was really excited to bring my game to the Rockets and do everything I could to help win the Memorial Cup, playing any role that they needed,” said Feist. “But it was actually a little bittersweet because my brother had been called up to the Pats and made his debut a few days later.”

Before the season came to an early end due to Covid-19, he established himself as a steady defenceman, who could back up his teammates when need be. He appeared in 22 games with the Rockets, posting seven points (2G, 5A) and 28 penalty minutes.

He set career bests during the 2020-21 shortened season, posting ten points (2G, 8A), 18 penalty minutes and a team leadings +15 plus/minus rating over 14 games. He credits the spike due to his training and confidence.

“Obviously, I worked hard over the offseason. I think I just came in with a lot more confidence, I just decided if I’m going to make this happen I need to have a big year.”

The Arizona Coyotes took notice, inviting him to their development camp after he went undrafted. He stuck around a little longer, getting the chance to play in their prospects tournament.

“It was really cool experience, it was an honour to be invited, I know lots of guys don’t. I’ve taken that experience of attending their camp and what I learned to apply to what I do now. Hopefully, it can help me get a contract for next year.”

This past summer Feist stayed in the Kelowna area, training with a handful of NHLers.

Prior to the start of his fourth and final WHL season, Feist was told that he would be the next captain of the Rockets. We asked him what it meant to be a good leader and who he felt had an impact on him when he was a rookie in the league.

“Especially with the young guys, I like to be there for them. I know when I was a young guy it was nice when there was an older guy there for me to talk to me and make me feel more comfortable. I like to be that guy in the room to make everyone feel comfortable and included, just bring the best out of everyone.

“Jaret Anderson-Dolan definitely helped me, he was a great role model for me when I was younger.”

As for what he wants to do in his final season with the Rockets, he wants to leave the organization on a winning note.

“Being the captain, I want to take this team under my wing and have a good year — I believe we have a good team this year. I just need to lead these guys as best as I can, make the playoffs and hopefully have a good playoff run.”