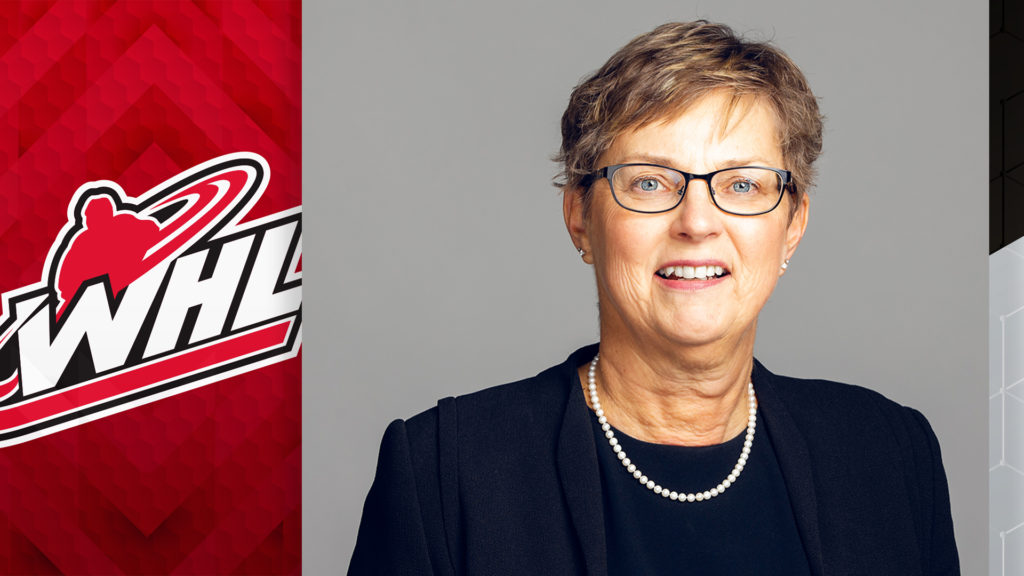 Calgary, Alta. –  The Western Hockey League announced today, on behalf of the WHL Board of Governors, that Yvonne Bergmann, longtime WHL Vice President, Business, has been named this year’s recipient of the WHL Governors Award and the first female to be recognized with the prestigious honour.

Bergmann was presented with the WHL Governors Award by WHL Chairman of the Board Bruce Hamilton, earlier this week in Kelowna.

“Yvonne has been the driving force of the unprecedented success the WHL has achieved on the business side of our operation for over the past 20 years,” commented WHL Commissioner Ron Robison. “Yvonne’s leadership was not only critical in the growth of our corporate partnerships but all aspects of our business operations, and she is most deserving of this prestigious WHL award.”

Following 20 years of successfully leading the marketing, finance and administrative operations of the WHL Office, Bergmann retired on June 30, 2021. Considered to be one of the top female executives in hockey, Bergmann joined the WHL as Director, Business Operations prior to the start of the 2001-02 season. Under Bergmann’s leadership, the WHL experienced remarkable growth in corporate partnerships, rising to all-time highs prior to the onset of the COVID-19 pandemic.

Bergmann played a critical role in the planning and execution of numerous national events, including six Memorial Cup tournaments, highlight most recently by the 100th Memorial Cup celebration in Regina (2018).

Prior to her time with the WHL, Bergmann served over 10 years with Hockey Canada as Director, Marketing and Events (1988-98), and three years with Icelink International as Director, Operations (1998-01).

About the Western Hockey League
Regarded as the world’s finest development league for junior hockey players, the Western Hockey League (WHL) head office is based in Calgary, Alberta. The WHL consists of 22 member Clubs with 17 located in Western Canada and five in the U.S. Pacific Northwest. A member of the Canadian Hockey League, the WHL has been a leading supplier of talent for the National Hockey League for over 50 years. The WHL is also the leading provider of hockey scholarships with over 375 graduates each year receiving WHL Scholarships to pursue a post-secondary education of their choice. Each season, WHL players also form the nucleus of Canada’s National Junior Hockey Team.