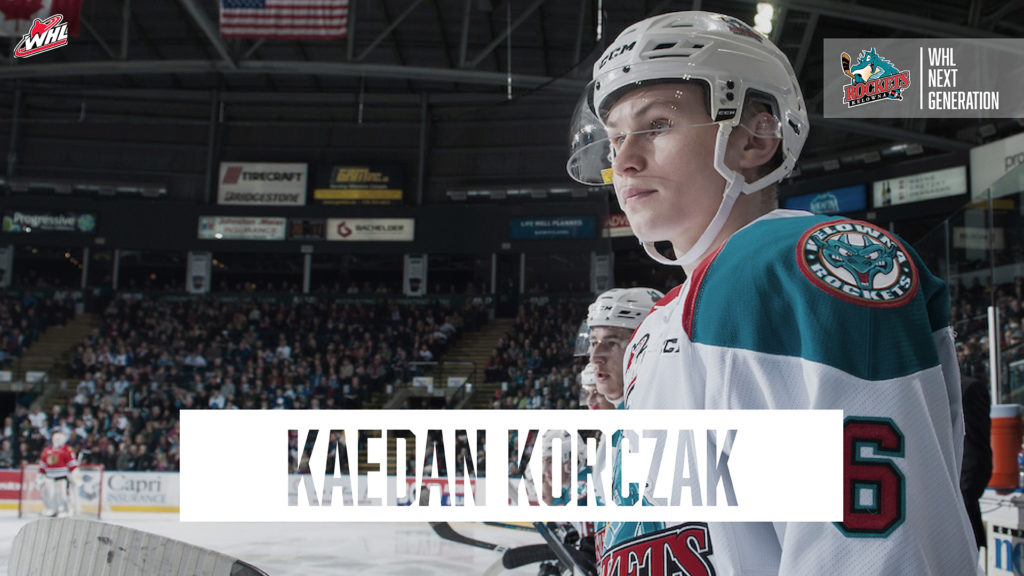 WHL Next Generation is a 22-part series highlighting a handful of the future stars of the Western Hockey League. From first-round bantam draft picks to later-blooming selections, get to know the names of players set to establish themselves as the newest crop of exciting talent to grace the WHL. From August 1 through September 11, get the inside scoop on the incoming crew of 16-year-olds.

The Kelowna Rockets have a long history of developing top-tier defensemen in the WHL.

From NHL All-Star and two-time Olympic champion Shea Weber to 2017 first-round NHL Draft pick Cal Foote, the Rockets organization has developed some of the best defensemen the league has to offer.

And with his 16-year-old season on the horizon, Kaedan Korczak is looking forward to getting the opportunity to add his name to that prestigious list.

The Rockets’ first round pick, 11th overall in the 2016 WHL Bantam Draft, Korczak got his first taste of WHL action when he played four games with the Rockets in December 2016, right in the midst of the World Junior Championship.

“It was a lot different from Midget, actually. Even just regular season it was different. The pace was quicker; bigger, tougher guys; faster. I just adjusted to it and I thought I did pretty well,” Korczak said.

His time spent with the big club didn’t end there, though.

When top Rockets defenseman Cal Foote was suspended two games into the team’s second round playoff matchup with the Portland Winterhawks, they turned to the then-15-year-old Korczak to fill the hole in their lineup.

“That was a whole different experience. It was kind of crazy, actually, to suit up for my first playoff game in Portland, there. The fans were nuts and then Seattle it was even more electric,” he said, noting that stepping into the lineup for Foote was a cool experience.

“I like to compare myself to Cal Foote of the Rockets, there. He’s like a fixture in his own end and he does well at it. He’s also one to jump in and get his shots through in his own end.”

In all, the Yorkton, Sask. product suited up for five playoff games with the Rockets, including three games of the 2017 WHL Western Conference Championship between Kelowna and the Seattle Thunderbirds.

“You can’t take a shift or a period or game off. You have to be at your best every time you’re on the ice,” Korczak said.

When he wasn’t playing with the Rockets this season, Korczak was making waves at the Midget level as one of the top defenseman for the Yorkton Maulers of the Saskatchewan Midget AAA Hockey League.

In 42 games with the Maulers this year, Korczak posted 29 points (11 goals, 18 assists) to finish second in regular season team scoring and fourth among all SMAAAHL defensemen.

He added another three goals and two assists in seven playoff games to lead his team to a first round upset of the second-seed Notre Dame Hounds.

“I played with some good d-partners and some good forwards on the power play there, so it’s all thanks to my teammates,” Korczak said.

The 6-foot-0, 170-pound right-handed defenseman hasn’t been taking it easy during the off-season.

Earlier this month, Korczak was in Calgary to participate in Hockey Canada’s U17 Summer Showcase where he notched a goal and an assist in three games for Team Blue.

“It means a lot. It’s an honour to be selected to the camp. I know lots of people that have gone to the camp and through this process and there’s lots of them in the NHL now that I look up to, so it’s an honour,” he said.

He’s been working hard off the ice, as well, as he looks to move onto the Rockets’ blue line full time this season.

“I just think I’ve got to get bigger, stronger and just keeping in shape. Just basically getting bigger and stronger to keep up to those older guys and battle in the corner with those older guys.”

Korczak and the Rockets open the 2017 WHL Pre-Season on Sept. 2 as they play host to the Victoria Royals at Prospera Place. Puck drop on that game is at 7:05 p.m. PDT.