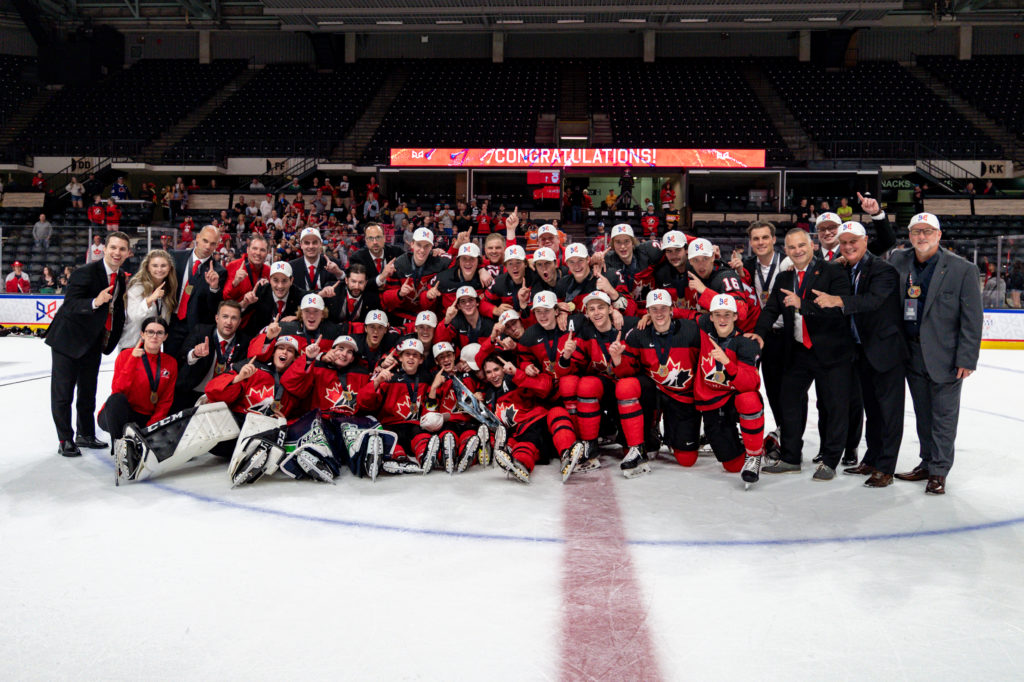 Tanner Howe and Brayden Yager both scored goals, while Scott Ratzlaff made 25 saves as Canada captured the gold medal at the 2022 Hlinka Gretzky Cup with a 4-1 victory over Sweden.

The Canadian squad featured 12 WHL players on its roster, including Kelowna Rockets forward Andrew Cristall and defenceman Caden Price. Canada outscored its opponents 34-3 throughout the tournament, winning gold for the first time in four years.

Canada struck first just shy of the six-minute mark, when Regina Pats forward Howe found room at the side of the Swedish net, lifting a puck into the goal from a very sharp angle on the goalline.

After a Swedish equalizer with 8:03 to play in the opening frame, the Canadians extended their lead before the period was through on a power play marker from Ethan Gauthier. Prince George Cougars forward Riley Heidt earned the primary assist as Canada took a 2-1 lead into the first intermission.

Heidt earned another assist in period two, setting up Calum Ritchie’s marker at 5:54 as the puck took a wild carom off the end boards, allowing Ritchie to deposit it into the Swedish cage.

East Division foes Brayden Yager (Moose Jaw Warriors) and Zachary Benson (Winnipeg ICE) combined on the lone goal of period three. Benson grabbed a puck behind the Sweden net, firing it out front to Yager who knocked home his fifth goal of the tournament with 4:04 to play.

Ratzlaff, who skates with the Seattle Thunderbirds, was again sensational in goal, stopping all 17 shots he faced over the final two periods of the game.

The product of Irma, Alta. finished the tournament with a 4-0-0 record and 0.75 goals-against average.

In addition to the 12 players on the Canadian playing roster, the WHL was also represented by Kelowna Rockets head coach Kris Mallette and Lethbridge Hurricanes general manager Peter Anholt.

Saturday’s win marked Canada’s 23rd gold medal at the Hlinka Gretzky Cup since the tournament was inaugurated in 1991.

The 2023 Hlinka Gretzky Cup will be co-hosted by Czechia and Slovakia.