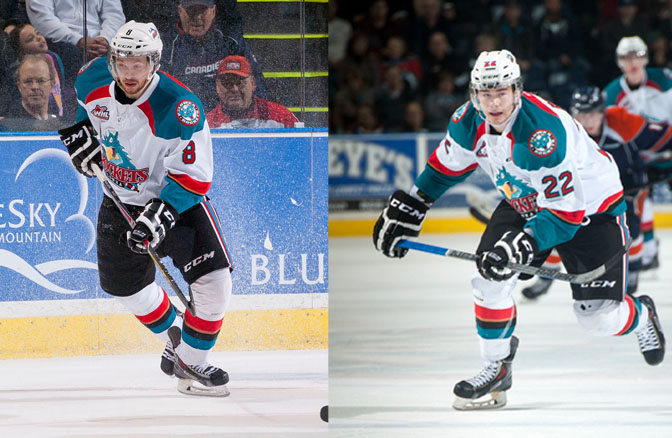 The Idaho Steelheads of the ECHL have announced that the team has agreed to terms with defenseman Cole Martin and forward Chance Braid, two graduating over-age players from the Kelowna Rockets.

The two were teammates last season with the Kelowna Rockets, champions of the Western Hockey League and runner-up in the prestigious Memorial Cup tournament.

“Cole is a smart hockey player who possesses good mobility, a player that takes pride in the defensive side of the ice,” said Idaho coach/GM Neil Graham said. “And Chance is a big, strong power forward that plays with speed and creates space for himself and his linemates and brings physicality to the lineup every night. Both players bring a winning attitude to the locker room.”

Martin, 21, posted a plus/minus rating over the past three seasons (including playoffs) of a whopping plus-163 over 262 games, including last spring’s Memorial Cup.  In his final season with the Rockets, he ranked third in the regular season among the team’s defensemen with 29 points (seven goals, 32 assists).  During the 2013-14 regular season, the Texas native posted a plus-61 rating, tops in the entire WHL.  Only one North American player, major-junior or pro, had a higher plus/minus rating that season.

Braid was acquired mid-season by the Rockets from Prince George of the WHL.  In 65 combined regular-season games, he posted 24 points (13 goals, 11 assists) and 78 penalty minutes.  He appeared in all five games for Kelowna in the Memorial Cup, scoring a goal and adding an assist.  The 20-year-old winger had 31 fighting majors to his credit in the WHL, winning 24 and losing just once (six draws).