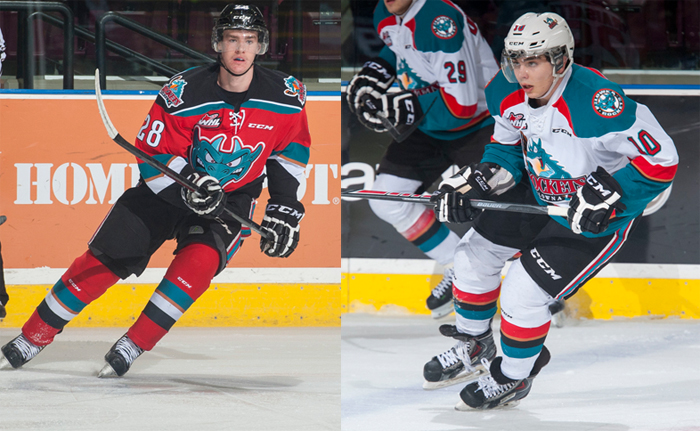 When the Kelowna Rockets made Nick Merkley and Joe Gatenby their first and second round bantam picks in 2012, they not only grabbed two top prospects, but two close friends who had been pushing each other on the ice from the time they first put on skates.

Now the pair are among hundreds of young hockey players, including a few other Rockets’ teammates, that could be drafted in the 2015 NHL Entry Draft to be held Friday and Saturday. Merkley is a lock and is expected to be a first round pick, while Gatenby is seen by some as a sleeper with great defensive skill and was ranked 174th in the NHL Central Scouting year-end rankings.

“I’m pretty lucky to have a friend like Nick,” said Gatenby, after an early morning workout at Prospera Place this week. “Even when we got to Kelowna we were the only 16-year-olds on the team. We had to stick together. For us it’s been exciting. We’ve been able to help each other and even when we were young we were able to push each other. When we were younger he would never stop moving, never stop working. He was so competitive and I’ve always loved battling with him.”

The minor hockey connection ended when Gatenby was in Grade 8 and he and his family moved to Kelowna to play two years at the Pursuit of Excellence before making the Rockets as a 16-year-old.

During his rookie season ice time was at a premium for Gatenby but that only served to help his development.

“I came into a situation that was pretty unique because the Rockets were so strong,” said Gatenby, an excellent student who was the Rockets academic award winner this year as well as the WHL Western Conference nominee for scholastic player of the year.

“I really had to battle for my ice time. I really learned how to play an extremely sound defensive game in order to get minutes,” said Gatenby, who graduated from KSS this spring. “This year I had a bigger role and at the end I think I was looked at as a responsible guy and a guy that shows up every night and keeps getting better.”

This weekend Gatenby and Merkley will both be watching the draft closely. Gatenby will remain in Kelowna and watch with his family while Merkley will attend the draft and by all accounts will be taken Friday night in the televised first round of the draft.

For Gatenby, he says it’s a huge day if he is drafted, but it won’t change his focus if he is not.

“It’s exciting because you have worked a lot growing up and it would be a big step to get drafted for sure but regardless of whether I get drafted or not I’m still going to be be doing the same thing, going to the gym, trying to get better every day. That’s all I have been doing since I was a little kid,” he said.

Gatenby and Merkley aren’t the only Rockets who will be paying special attention at the NHL Draft. Other Rockets could also be drafted including defenceman Devante Stephens who was ranked 116th in the final central scouting rankings and will likely draw plenty of attention. The 6-foot-1 defenceman from Surrey made huge strides in development after missing almost a full year of midget hockey due to injury,

And European import Tomas Soustal is also on the radar after his rookie season with the Rockets. Soustal had a solid tournament at the Memorial Cup and the 6-foot-3 forward from the Czech Republic has also drawn attention from scouts.

The first round of the NHL Entry Draft is tonight at 4 p.m. PST while the conclusion of the draft will take place Saturday morning.