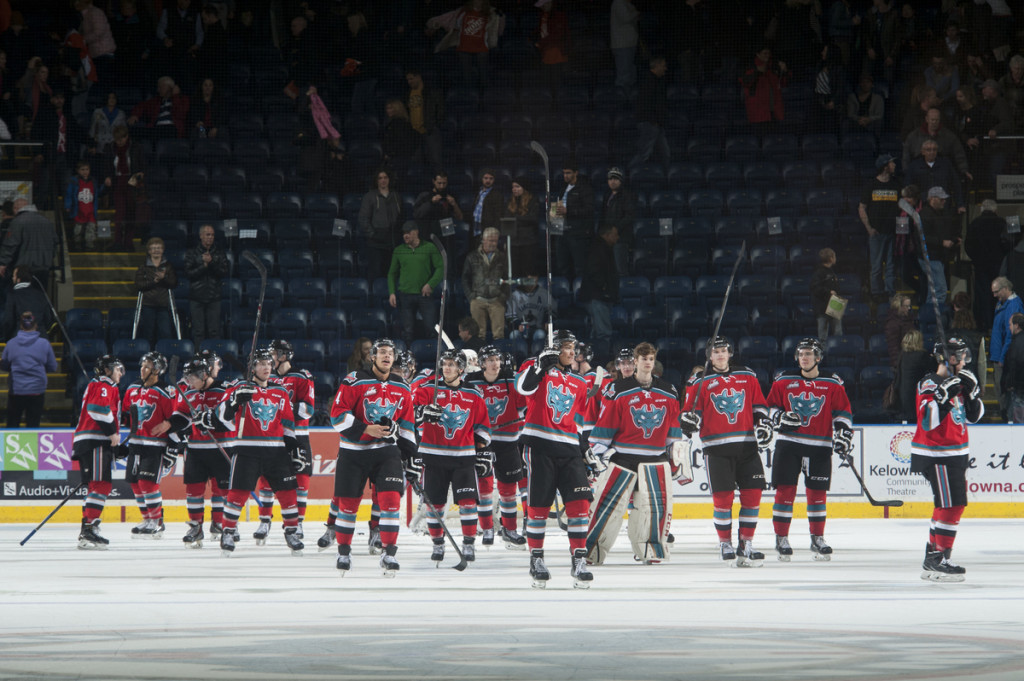 Tonight’s Preview: The Kelowna Rockets open the second half of the season tonight with a home game against the visiting Kamloops Blazers. This is only the third meeting of the season between these two teams’. Back on September 20th, the Rockets were a 6-1 winner before earning a 6-4 victory in Kamloops October 15th. Over the next 33 games, the Rockets will face the Blazers 8 times including twice in January (2nd and 9th) and three times in February (6th, 7th and 18th) and twice in March (13th and 14th). After playing 11 of their last 17 games on the road, the Rockets play 9 of their next 11 games on home ice. The Rockets are coming off a highly successful road trip prior to the Christmas break with 4 wins and 1 loss in five games on an Alberta road trip. The Rockets beat Lethbridge (4-3 shootout), Medicine Hat (4-2), suffered a loss in Calgary (4-1) and earned back-to-back wins in Edmonton (4-1) and Red Deer (6-3). On Tuesday the Rockets host the Prince George Cougars before ringing in the New Year against the Blazers on January 2nd in Kamloops. Overall, the Rockets have a record of 8-4-2-0 in their last 14 games with points in 10 of those 14.

This and That: The Kelowna Rockets have played the fewest home games of any team in the WHL. The game tonight is only its 16th at Prospera Place….Twenty one of the Rockets final 36 games will play played against teams in the BC Division….The team has only two more trips to the U.S. The Rockets are in Seattle February 10th and in Everett on March 3rd…The year 2014 is worth celebrating. The team, during the 2014 calender year, has a record of 62-13-5-0…No lack of birthdays in January. Devante Stephens (Jan 2), Riley Stadel (Jan 16), Tyrell Goulbourne and Michael Herringer  (Jan 26th ) and Tanner Wishnowski (Jan 28th) blow out candles. Dan Lambert, Kris Mallette and Travis Crickard also turn a year older….Tyson Baillie is three goals shy of his career high 26 he scored in the 2012-2013 season…Cole Martin leads the WHL with a +28 rating. Martin is now a +91 in the last two seasons…With four wins on a recent Alberta road trip, Jackson Whistle set a new career high with 22 victories. The 19 year-old had 18 wins all of last season…Newly acquired Gage Quinney will make his home debut tonight. The 19 year-old has two goals in his first four games since he was acquired in a trade with the Prince Albert Raiders….Nick Merkley played in his 100th career game December 12th in Medicine Hat…The Rockets have been held to three goals or less only 9 times this season…The Rockets are rated as the second best team in Canada according to the CHL Top 10 junior rankings…Nick Merkley has 16 multiple point games….The Rockets have not been shut-out in 112 consecutive games. The last time the Rockets were held without a goal was March 3, 2013 in a 3-0 loss in Kamloops…Josh Morrissey, Madison Bowey and Kris Schmidli are all participating at the World Junior Hockey Championships in Montreal/Toronto…

Tyson Time: Nineteen year old Tyson Baillie has 71 goals and 78 assists in the last three seasons. That adds up to 149 points in his last 158 regular season games dating back to the start of the 2012-2013 campaign. Sixteen (16) of Baillie’s 23 goals this season have come on the road. Don’t be surprised at that statistic. Baillie has 47 career goals on the road. That is 47 of his career 81 goals (57%) scored are on opposition ice. Baillie’s first career goal came on the road in Everett in his first career WHL game.

Blockbuster Deal: The Kelowna Rockets pulled off a four player deal with the Prince Albert Raiders December 10/2014. The Rockets acquired 19 year-old Josh Morrissey and 19 year-old Gage Quinney from the Raiders for 19 year-old Jesse Lees, 18 year-old Austin Glover and a 2nd and 3rd round draft pick. The trade deadline is January 10th.