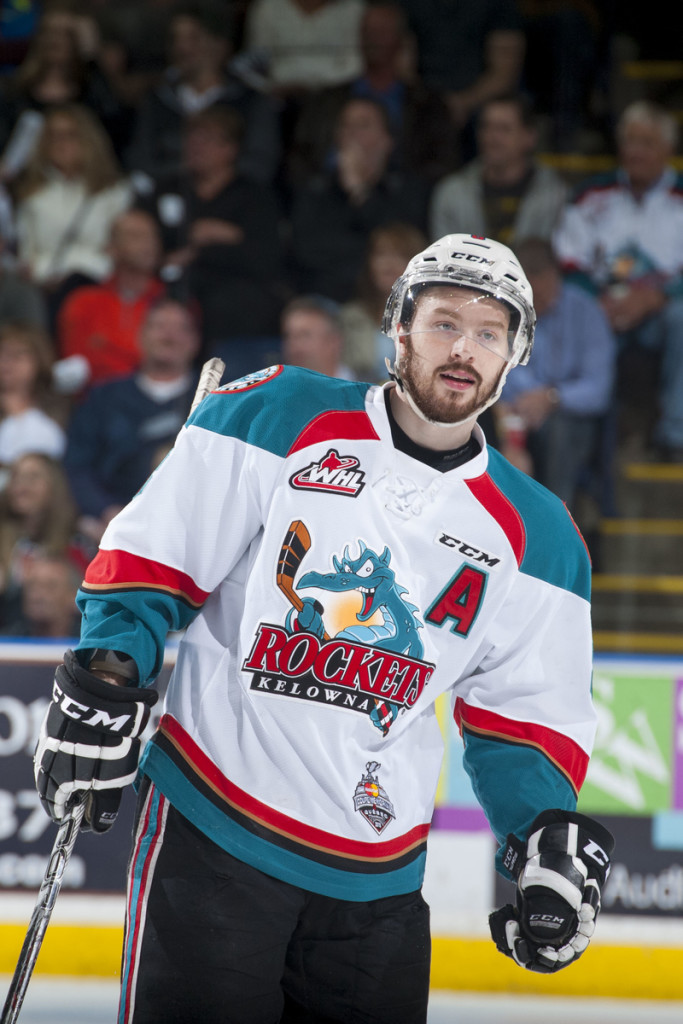 “We’re not done yet. We’ve still got the Memorial Cup.”

Even amidst the jubilation of capturing their club’s fourth WHL championship last week, Chance Braid and the rest of the Kelowna Rockets knew that they still have much work ahead – and even more glory left for them to attain.

“The Memorial Cup was our goal from the start of the season,” said Rockets’ injured left winger, Tyrell Goulbourne. “To make it there and win it.”

The reigning WHL champions will next face their rival league equals – OHL champion Oshawa Generals, QMJHL champion Rimouski Oceanic, and tournament host Quebec Remparts — in the quest to declare ultimate major junior supremacy. Kelowna’s sweep of the Brandon Wheat Kings in the WHL final – including a shutout in the series clinching game – was unquestionably impressive, but when the Rockets collide with the OHL and QMJHL champs, can they produce equally dominant results?

“They’re the top teams in each of their leagues, so it’s going to be tough,” said Goulbourne, whose return date from injury is still unknown heading into the Memorial Cup. “I feel like if we play our game and our way, I like our chances in that tournament.”

“It’ll be interesting to see how we stack up,” said assistant captain, Cole Martin. “I feel pretty confident in our group in there. We’ve got a lot of heart in that room and I think that’ll help us be successful.” 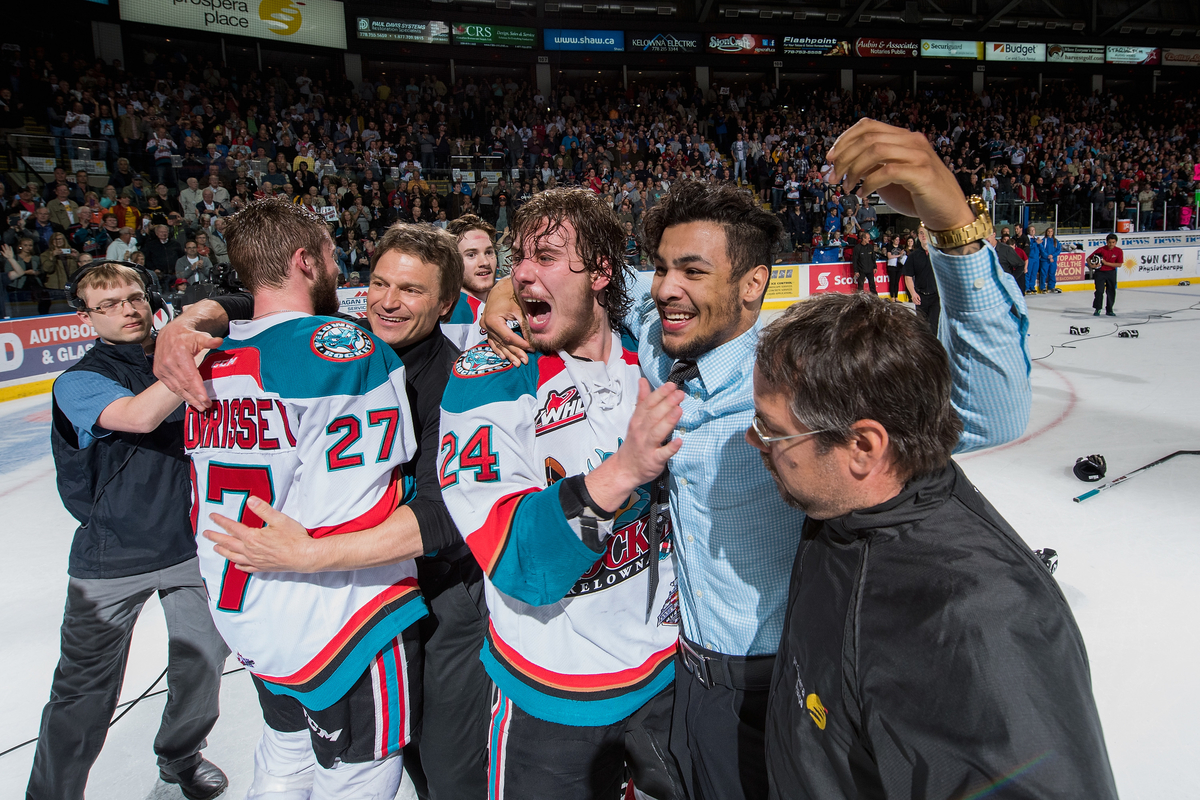 “When we go up there, we’re going to work our butts off and hopefully get the win,” added Braid. “We won the WHL championship, and we know we can do more. We’ve got role players, we’ve got goal scorers, we’ve got a goalie – with the team we’ve got, I think we’re going to do just fine.”

The Rockets are certainly bringing a capable group to the dance. Jackson Whistle’s four shutouts lead the CHL through the playoffs, as do Leon Draisitl’s three short-handed goals. The team should be well rested too – winning the WHL in only 19 games means they have played up to three less games than their upcoming opponents. After only losing three games in their WHL playoff stretch, the Rockets earned a winning percentage of 0.842% – both of those statistics top the Generals, Ramparts, and Oceanic. 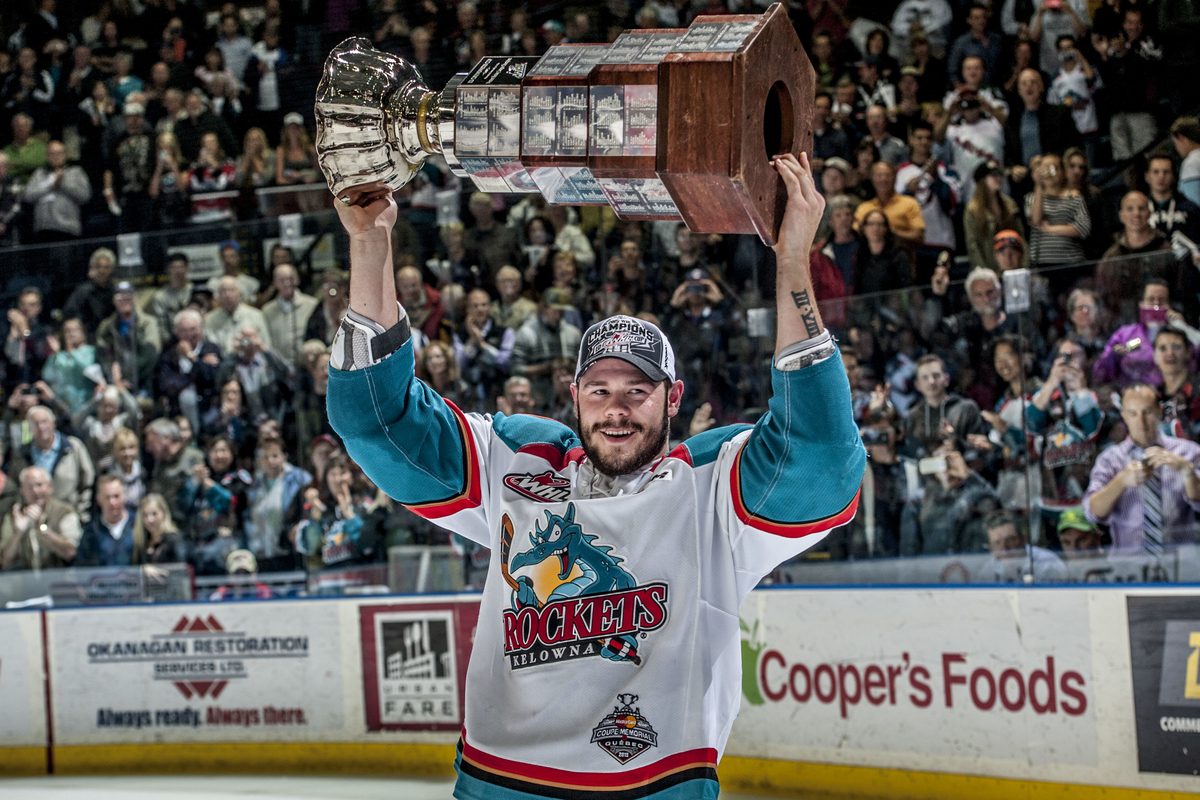 While the Rockets will unquestionably match their eastern rivals in potency, a bigger question will be whether Kelowna can counter what their opposition brings to the table. They will have to put pucks past Goals-Against and Goals-Against-Average leader, Louis-Phiip Guindon of Rimouski (25; 0.184), and save percentage leader, Zachary Fucale of Quebec (.913%). They will also have to deactivate top point producers, Cole Cassels and Michael Dal Colle of Oshawa (31), and goal scoring leader, Adam Erne of Quebec (21).

For Goulbourne, Martin, and Braid – the Rockets’ three eldest statesmen – the Memorial Cup tournament is uncharted waters, as it is for the rest of Kelowna’s current roster. Aside from the club’s long term staff, no current Rockets have experience from the team’s last Memorial Cup appearance in 2009 to mine, nor from their tournament win in 2004. With that in mind, all three veterans will be looked to by their teammates for their savvy leadership in Quebec – on and off the ice – and not just because of their age. Goulbourne and Martin both recorded career highs in regular season goals, assists, and points this year, and Braid has never been more productive in the post-season in any statistical category.

Rockets fans will have to wait until May 31st to find out whether this trio of 20 year olds in their swan song season of junior hockey will help lead Kelowna to their second Memorial Cup title in franchise history, or not. One thing that is for certain though – no matter how the tournament plays out, none of the three will ever forget how their junior hockey careers concluded.

Follow Dave Cunning on Twitter @davecunning, read his blog at http://davecunning.wordpress.com and listen to his podcast at http://xppsp.podbean.com