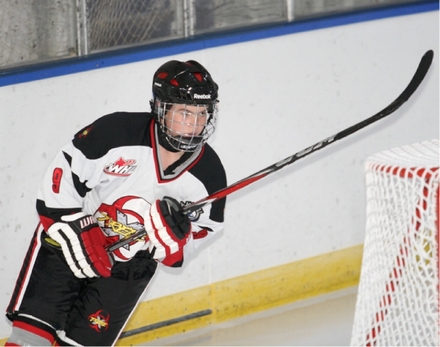 The Kelowna Rockets selected a skilled centre with its first pick at the annual Western Hockey League bantam draft held in Calgary today.

“I think he’s a dynamic player who has great skill,” said Rockets director of scouting Lorne Frey after making the selection. “He’s a tremendous skater and he’s going to be an exciting player to watch and that’s what you want: To put people in the building with exciting players.”

Dube had 24 goals and 26 assists for 50 points in 26 games with the bantam Hounds, a team that actually played in the Saskatchewan midget league.

“He’s developed quite nicely in Notre Dame and we’re quite pleased,” said Frey, who selected 12 players at the draft table.

With its second round selection the Rockets added to its stable of young defenceman with the selection of Cal Foote, the son of former NHL player Adam Foote.

Foote played with the Colorado Thunderbirds minor hockey program and has been coached by his Dad throughout his minor hockey career.

Rockets assistant coach Dan Lambert, who played with the elder Foote in both Quebec and Halifax, says his son looks to have the right tools to be a good player.

“He plays  like a young pro,” said Lambert. “He defends very well and has a great first pass. You can tell his Dad Adam did a great job coaching him and you can tell he’s been around pro hockey his whole life.”