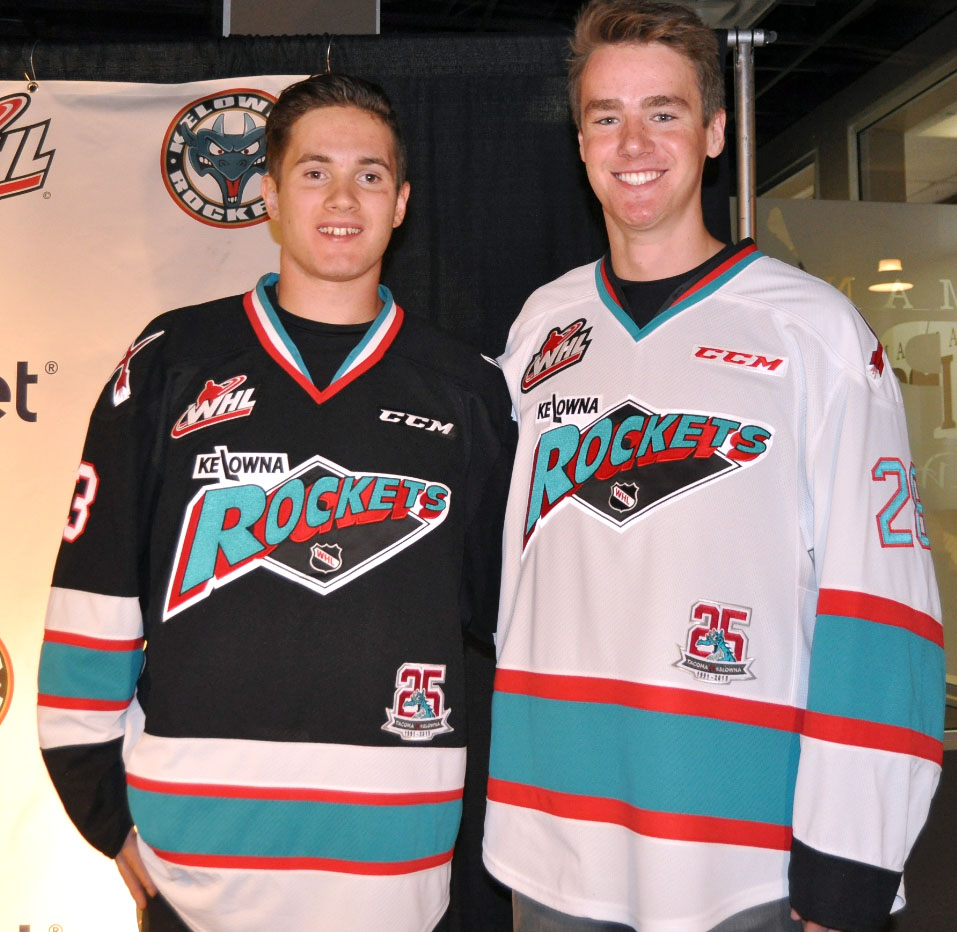 The Rockets unveiled its new logo and commemorative jersey for the 2015-16 WHL season.

As the club gets set to kick off another year, here’s a look back at some highlights of the franchise:

•The Tacoma Rockets began operation in the WHL as an  expansion franchise in 1991 when the Hamilton family led by Bruce Hamilton was granted the franchise. The first hire was assistant general manager Lorne Frey and along with Gavin Hamilton and his wife Anne-Marie, who began work for the team in Tacoma, the front office has been stable for the entire 25 year history. Office staff including Carrie and Kim and Theresa are all long time employees.

•The team moved to Kelowna to begin play as the Kelowna Rockets in the 1995-96 season, playing out of the Memorial Arena. The business operated out of an office blocks away from the arena meaning the team had to move in and out to stage every single game.

•The Rockets brand new, 6,007 seat arena opened in April of 1999 when it was known as Skyreach Place and now called Prospera Place. Only once in the 15 years since 2000 have the Rockets iced a team that finished below .500. Sixteen banners hang from the rafters at Prospera Place, including the 2004 MasterCard Memorial Cup Championship, four WHL Championship banners and six WHL BC Division titles.

•The Rockets have won more than 50 regular season games four times, including the last three years running, only the third team in the entire CHL to win 50 games three straight years.

• A 2010 report by UBC Okanagan said the Rockets generate $30 million for the Kelowna economy each year, from its games, the spinoffs and the alumni that have stayed in the area.

•Each summer players gather in Kelowna to take part in Kelowna Rockets Alumni Foundation golf tournament. In the 15-year history of the event, the Rockets have raised over $350,000 for the Kelowna General Hospital. In 2015, the alumni announced a three year partnership with the Canucks Autism Network, pledging to raise $100,000 for kids in Kelowna who suffer from autism.

•Rockets players are put to a high standard and are role models in the community. School visits, community events, fundraisers. Some of the charities the team works with on a regular basis include the Kelowna Community Food Bank, BrainTrust Canada, the Kelowna General Hospital Foundation. Canadian Cancer society, Canadian mental health, Heart and Stroke Foundation, Breast Cancer Foundation, SPCA, Cops for Kids, Movember.

•Commemorative logo to celebrate the team’s 25th anniversary combines the original logos from Tacoma and Kelowna.