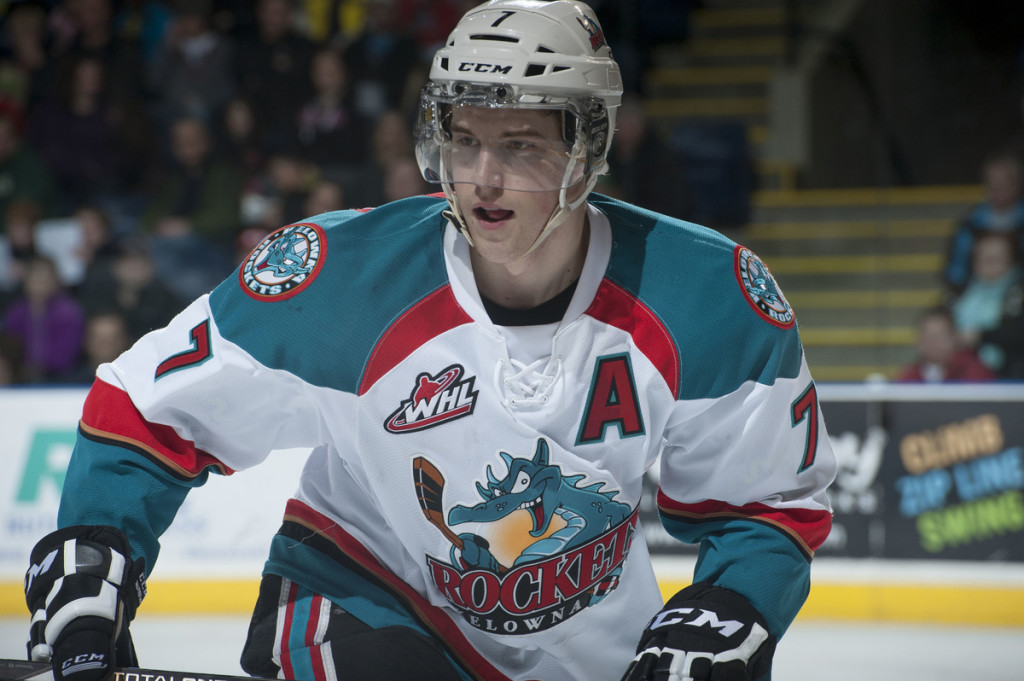 The Western Hockey League has named Kelowna Rockets’ defenceman Damon Severson  the Denny’s WHL Player of the Week for the week ending April 6, 2014.

Severson scored three goals and added four assists for seven points along with a +3 rating in two games over the last week, leading the Rockets to a pair of victories over the Seattle Thunderbirds to open their Western Conference second-round playoff match-up.

On Thursday, April 3rd, Severson notched two goals and two assists while being named the game’s 1st Star in a 6-2 win over the visiting Thunderbirds in the series opener.  On Saturday, April 5th, Severson tallied a power play goal and added a pair of assists as the Rockets skated to a 6-3 win over the Thunderbirds to take a 2-0 lead in the best-of-seven series.

Severson, a 19-year-old from Melville, SK, is in his fourth season in the WHL as a member of the Rockets.  A 2013-14 Western Conference Second-Team All-Star, Severson finished third on the Rockets in regular-season scoring with 61 points, and currently ranks second on the team in playoff scoring with nine points.  Selected in the ninth round, 192nd overall, in the 2009 WHL Bantam Draft, Severson has appeared in 260 career regular-season contests for the Rockets, amassing 36 goals and 167 points.  Severson was chosen in the second round, 60th overall, by the New Jersey Devils in the 2012 NHL Draft.

The WHL has also nominated Tristan Jarry of the Edmonton Oil Kings for the Vaughn CHL Goaltender of the Week award.  A Delta, B.C., product, Jarry posted back-to-back shutouts in two appearances this past week, helping the Oil Kings to a 2-0 series lead over the Brandon Wheat Kings in their Eastern Conference second-round best-of-seven match-up.  On Thursday, April 3rd, Jarry stopped all 15 shots he faced to record his first playoff shutout as the Oil Kings defeated the visiting Wheat Kings 5-0 in Game 1 of the series.  On Saturday, April 5th, Jarry turned aside all 29 shots he faced for his second straight shutout while also earning 1st Star honors in a 3-0 win over Brandon in Game 2.  Jarry, an 18-year-old, is in his third season in the WHL with Edmonton.  The Oil Kings’ third-round pick, 46th overall, in the 2010 WHL Bantam Draft, Jarry has appeared in 104 career regular-season games, posting a 70-23-3-1 record with 14 shutouts.  Jarry was selected by the Pittsburgh Penguins in the second round, 44th overall, in the 2013 NHL Draft.