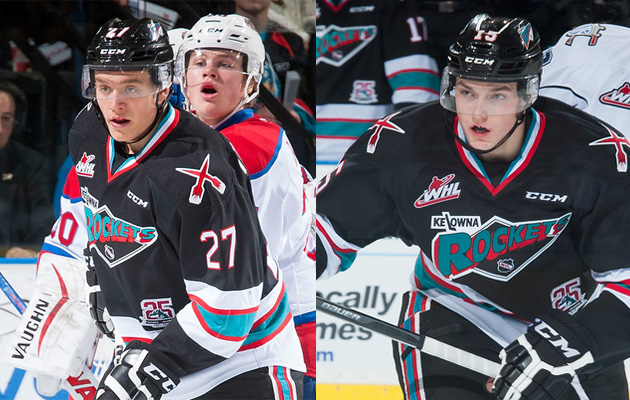 The Kelowna Rockets are proud to announce that both of its European import players have been invited to their respective country’s World Junior Hockey Championship evaluation camps.

Tomas Soustal, from Unicov, Czech Republic and Calvin Thurkauf of Zug, Switzerland, have been invited to evaluation camps being held by their national teams, in advance of the 2016 World Junior Championship, to be held this year in Helsinki, Finland.

Soustal is in his second season with the Rockets and has posted 22 points in 26 games, scoring 10 times and adding 12 assists, already surpassing the eight goals and 10 assists he had last year as a rookie.

In his rookie season, Thurkauf has posted seven goals and nine assists in playing in all 28 games so far this season.

Soustal and Thurkauf join Team Canada invites Rourke Chartier and Nick Merkley as Rockets that have a chance to make their national team and play for the World Junior Championship.

All four will leave the Rockets prior to the team’s Saskatchewan and Manitoba road trip, which begins Dec. 11 in Regina.

The Rockets have added affiliated players Conner Bruggen-Cate and Alexander Uryga to its roster for the trip.