Foote taking steps towards establishing himself with the Lightning

Family legacy can be a tough thing to live up to, but so far, Cal Foote is doing pretty well for himself.

After enjoying back-to-back quality campaigns with the AHL’s Syracuse Crunch, Foote – the son of Colorado Avalanche legend Adam Foote – is getting his first crack at NHL duty with the Tampa Bay Lightning at the start of the 2020-21 NHL season.

It’s the first step in the pursuit of long-term NHL success, something Cal watched up close and personal as his father Adam skated through 19 NHL seasons, over 1,100 career regular season contests, two Stanley Cup championships, an Olympic gold medal and a World Cup gold medal.

Back on January 30, Foote registered a milestone all young players dream of one day achieving, when he collected his first-career NHL goal in a 4-3 win over the Nashville Predators. It’s the first step in what many hope will be a career just as long and as successful the one penned by Cal’s father.

“I guess I’m feeling more comfortable and I’m feeling more confident,” Foote said during post-game media following his first-career goal back on January 30. “It kind of felt more normal to me. But that was kind of a blackout [moment] – I don’t remember much right after [scoring], but it was a great feeling and it was a pretty awesome moment.

“They were kind of scrambling around on a long shift, so I happened to have a little extra room. But I’m usually not that close to the net so I just wanted to get it on net and luckily it found its way short side.”

That season capped a solid three years in the WHL, as the product of Denver, Colo., racked up a career-high 70 points (19G-51A) in 60 regular season contests, good enough to earn a place on the WHL’s First All-Star Team for the Western Conference. Mixed in during the holiday season was an appearance with Team Canada at the 2018 World Junior Championship, where Foote helped his country claim gold.

Selected by the Rockets in the second round (43rd overall) of the 2013 WHL Draft, big things were expected of Foote from that day. Though it took until May 11, 2015 for Foote to choose the WHL and the Rockets as the path for his continued development, it quickly became clear that the decision would pay dividends for the big defenceman.

In his WHL rookie season, Foote stepped in and made an immediate impact, tallying 36 points (8G-28A) in 71 regular season contests before appearing in another 18 playoff games and collecting nine points (1G-8A). He followed that up in 2016-17 with a 57-point season (6G-51A) in 71 games, also representing Team WHL at the CIBC Canada Russia Series. He rounded out his WHL days with the all-star showing in 2017-18, also representing Team WHL at the annual World Juniors scouting series once more.

Now with the big squad in Tampa, Foote has the opportunity to continue his development while learning from one of the best defenders in the NHL – Victor Hedman. He has fellow WHL Alumni and NHL veteran Luke Schenn – another former Rocket – to help guide him as well.

“When you play trying to make a big splash you kind of play out of your role and you try do too much,” Foote said of adjusting from playing major minutes in the AHL, to more focused minutes in the NHL. “For me, I just have to keep it simple and positive.”

Next up on the schedule for Foote and the Lightning is a Thursday evening matchup (5p.m. MT) against the Florida Panthers.

Cal Foote talks about his parents reaction to his 1st NHL goal and his start to the season! 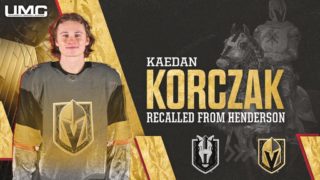